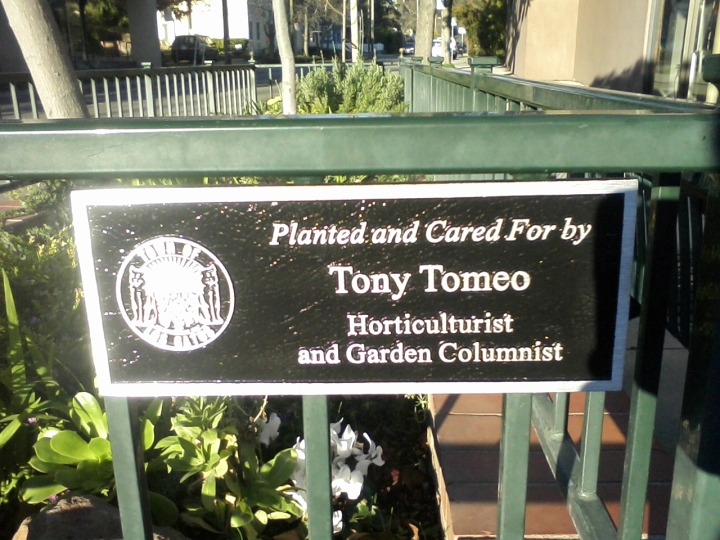 Main Street and Santa Cruz Avenue are the two main streets of downtown Los Gatos. They are the main shopping district, and the part of town that everyone sees. As much as things have changed, a bit of the familiar remains. Gilley’s Coffee Shoppe is still next door to the (rebuilt) Los Gatos Cinema. The brick La Canada Building miraculously survived the Earthquake. The simple deco Park Vista Building across the street is just as elegant now as it was a century ago. There are still concerts in the Town Plaza in summertime, shaded by the Town Christmas Tree that gets lit up in December.

Both Main Street and Santa Cruz Avenue are outfitted with big planter boxes that give the downtown a more relaxed and colorful ambiance. Each planter is elevated about a foot and a half, and contains one or two Indian hawthorn trees. A low wrought iron railing protects the contents of the planter boxes. Irrigation s automated. That is about all that the planters have in common.

Each planter box is ‘adopted’ by a member of the community, or a community group, each with different styles and different ideas of what we should plant in our boxes. Some like things neat and trim. Others believe that bigger is better. Some like plenty of foliage. Others like lots of colorful flowers. Some planter boxes even get adorned with seasonal decorations.

My little planter box is on the northwest corner of Nicholson Avenue and North Santa Cruz Avenue. It has a brass plaque with my name on it. It is my little garden space downtown, where I get to express my simple gardening style for everyone to see, even though I grow a few flowery things there that I would not actually waste space on in my own garden.

The trailing rosemary that cascades over the wall so nicely was there when I got the planter. So were the montbretia and liriope, which I did not want to remove because someone else had gone through the effort of planting them. When there was more space available, I planted a few inexpensive flowering annuals, like pansies and calendulas. As things grew, there was less space for annuals. Besides, I wanted to make a point of doing this planter nicely with sustainable plants that I propagated myself.

The two largest features are common aeoniums. The two original cuttings were on the dashboard in the car for weeks before I finally stuck them in the planter. They came from the home of a friend’s mother in Monterey. We emptied the home out after she passed away. It was gratifying that they found a home in my planter box, and even more gratifying that they grew so well and provided countless cuttings for copies all over town, including in other planter boxes. Between the two big aeoniums, there is a small bronze aeonium. It is the same age as the two big ones, but grows slower, and is regularly set back by people breaking off and taking the stems as fast as they grow.

These three aeoniums were not alone on the dashboard. They arrived with another related succulent, which I believe to be an old fashioned echeveria, and some sort of compact aloe. The echeveria has spread out over much of the area between the big aeoniums. The aloe is still confined to one corner.

To contrast with all the pale green foliage, I added two bronze ‘Australia’ cannas. They cost only a few dollars, and were probably my biggest expense in this entire project.

The most impressive feature of the planter box are the nasturtiums. Yes, common, simple and cheap nasturtiums. I wanted to get straight yellow nasturtiums for compatibility with the signs of the neighboring bicycle shop, but could not find any at the time. I instead started with the common ‘Jewels’ mix, which is still my favorite. After self sowing, the subsequent feral nasturtiums are only orange and yellow, with only one or two red blooming plants. What made them so excellent is how they grew! They overwhelmed the trailing rosemary (which is fine since they die back in summer when the rosemary takes over), and cascaded onto the walkway and curb. They filled the space between the railing and an adjacent bench, and even started growing through the bench. There was so much bright orange and yellow that no one seemed to mind that it was nasturtium.

After a long and warm summer, the aeoniums need serious grooming, and the nasturtium need to be replaced. I really hope that the planter box will be as impressive as it was last winter. The picture here is not very good. Perhaps I will get a better picture in a few months.

27 thoughts on “My Tiny Downtown Garden”