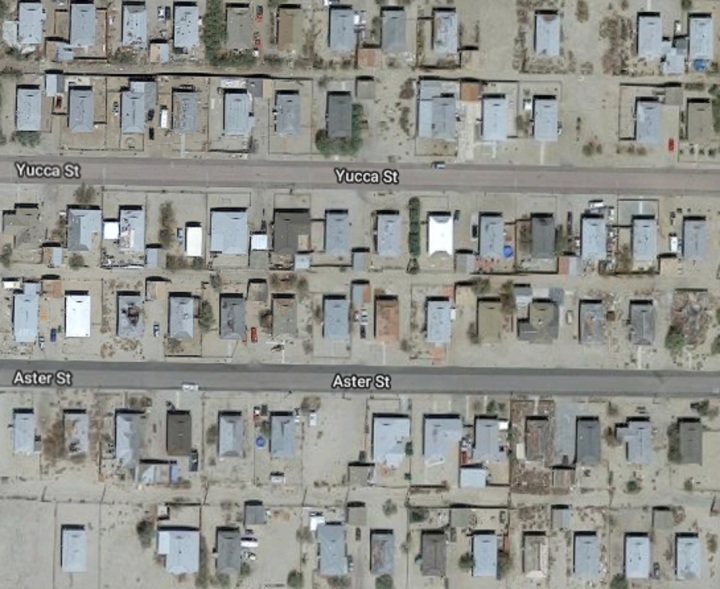 That is what this seemingly disorganized jumble of letters and numbers represents; the chemical formula for the mineral known as trona. It is what a certain small town in the very northwestern corner of San Bernardino County is named for. Trona is one of a few minerals mined and refined there. Apparently, not much else happens there.

Trona the town is about as out of the way as one can get in the contiguous United States of American. Death Valley to the northeast at least gets tourists. Not much flora survives in the hellish summer heat and caustically saline soil. The athletic field at Trona High School is famous for being grassless dirt. Even the now defunct golf course was dirt. Roofs are more important for providing shade than for keeping the four inches of annual rainfall out. A leaky house is more likely to petrify before it rots. The inertly arid air, roasting heat and acrid drifting minerals seems to sterilize and embalm even abandoned houses. The Google Satellite image shows how boringly uniform the factory tract houses are. Many are now abandoned. Some are missing.

Why am I mentioning Trona here? Because horticulture is so limited in Trona. There might not be many better places in America for a horticulturist who lives amongst dense forests of the tallest trees in the world to go on vacation! There are so few distractions! The vast desert extends for miles in every direction, with only a few plants surviving in home gardens in town. The satellite image shows how empty the gardens are. A single lawn can not be found. Even artificial turf is notably absent, perhaps because no one wants to go outside in such horrid weather.

I suppose that I will never know until I go there.