Cacti was the topic for my gardening column less than two weeks ago. ( https://tonytomeo.com/2018/07/30/cacti-are-notorious-for-nonconformity/ ) Both space and illustrations are limited in the column though. Only a picture of a prickly pear was posted with that main article. The other part of that article, which is a brief description and a picture of white epiphyllum, was posted the next day. ( https://tonytomeo.com/2018/07/31/epiphyllum-oxypetalum/ ) Since then, I have been wanting to get a picture of one of the small but delightful orange flowers of a prickly pear in the private collection of one of my colleagues. Now that I got that picture, I really did not know what to do with it. I got two other pictures of the fruit and stems of the same prickly pear, and three more pictures of other cacti in the same collection so that I could post them here. Instead of saving the best picture for last, the prickly pear flower is posted first just because it is that cool.

1. Prickly pear flower should bloom during the day. They should not be nocturnal. I can not be certain because I am not familiar with this particular species. What I do know is that the flowers have been open early in the morning, and then closed shortly after exposed to sunlight, almost like those of a nocturnal epiphyllum. It took me a while to get this picture of this single peachy orange flower.

2. Prickly pear fruit should ripen right after bloom, but most fall off of this plant while still green. It might be because the plant is potted and watered regularly. Those that ripen are only about two inches long, and quite pithy without much flavor. They would probably be bigger, more abundant and better flavored if the plant could grow in the ground.

3. Prickly pear pad is not as prickly as those that I got a picture of for the previous article about cacti. I do not know how their flavor is because I have not tried them. This is a small plant that can not spare many pads. Even if there were a few to spare, they are not very big, even when mature. The probably would not taste very goo either, since they take so long to mature in the pot.

4. Cereus cactus really is nocturnal; cereusly! It produces huge white flowers that are about as big as those of the white epiphyllum that was featured earlier. The flowers do not open until after sundown, and may wait until late at night. While open, they are powerfully fragrant. The fragrance seems to ‘turn on’ immediately when the flower open, and ‘turn off’ as soon as the flowers close before dawn.

5. Rat tail cactus, like epiphyllum, is epiphytic, which means that it grows where debris collects in crotches of limbs in big trees. If they grown on the ground, they just sprawl about and maybe form low mounds. This is not an exemplary specimen, although it bloomed well earlier, with reddish orange flowers that are significantly smaller than those of the epiphyllum, and also a bit smaller than those of the prickly pear.

6. Epiphyllum is a weird epiphytic cactus. This particular cultivar is even weirder than most. Cacti photosynthesize with their green stems, while using what should be leaves as spines. This cultivar does not seem to be satisfied with that technique, so is outfitted with these weird leafy appendages on its flat green stems, as if it really wants leaves like other plant have. 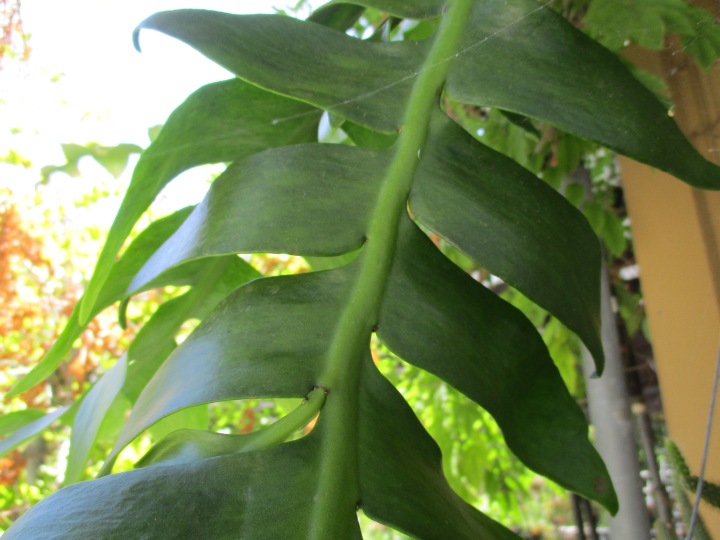 8 thoughts on “Six on Saturday: Cacti”