It is the ‘ivy’ of ivy league schools. Nonetheless, Boston ivy, Parthenocissus tricuspidata, is neither an ivy, nor indigenous to Boston. It is from eastern Asia, and is related to grape vines. It is related to Virginia creeper too, which is actually native to Boston, Virginia and the eastern half of North America. It has become popular locally for freeway sound walls.

Boston ivy is an aggressive clinging vine that can climb to the top of a ten story building. Unfortunately, there are a few problems with that. It ruins wooden or painted surfaces, so can only climb concrete or masonry. It climbs over windows if it gets the chance. Thicket growth is difficult to remove if it is too high to reach. On rare occasion, mice can nest in it.

Otherwise, Boston ivy works well on freeways. Although deciduous, its vines discourage graffiti. Even while bare, its texture helps to muffle sound. Its exquisite autumn foliar color might begin to develop as early as late summer, and lingers until frost. Boston ivy is quite resilient to neglect. Shabby plants generate fresh new growth after major winter pruning. 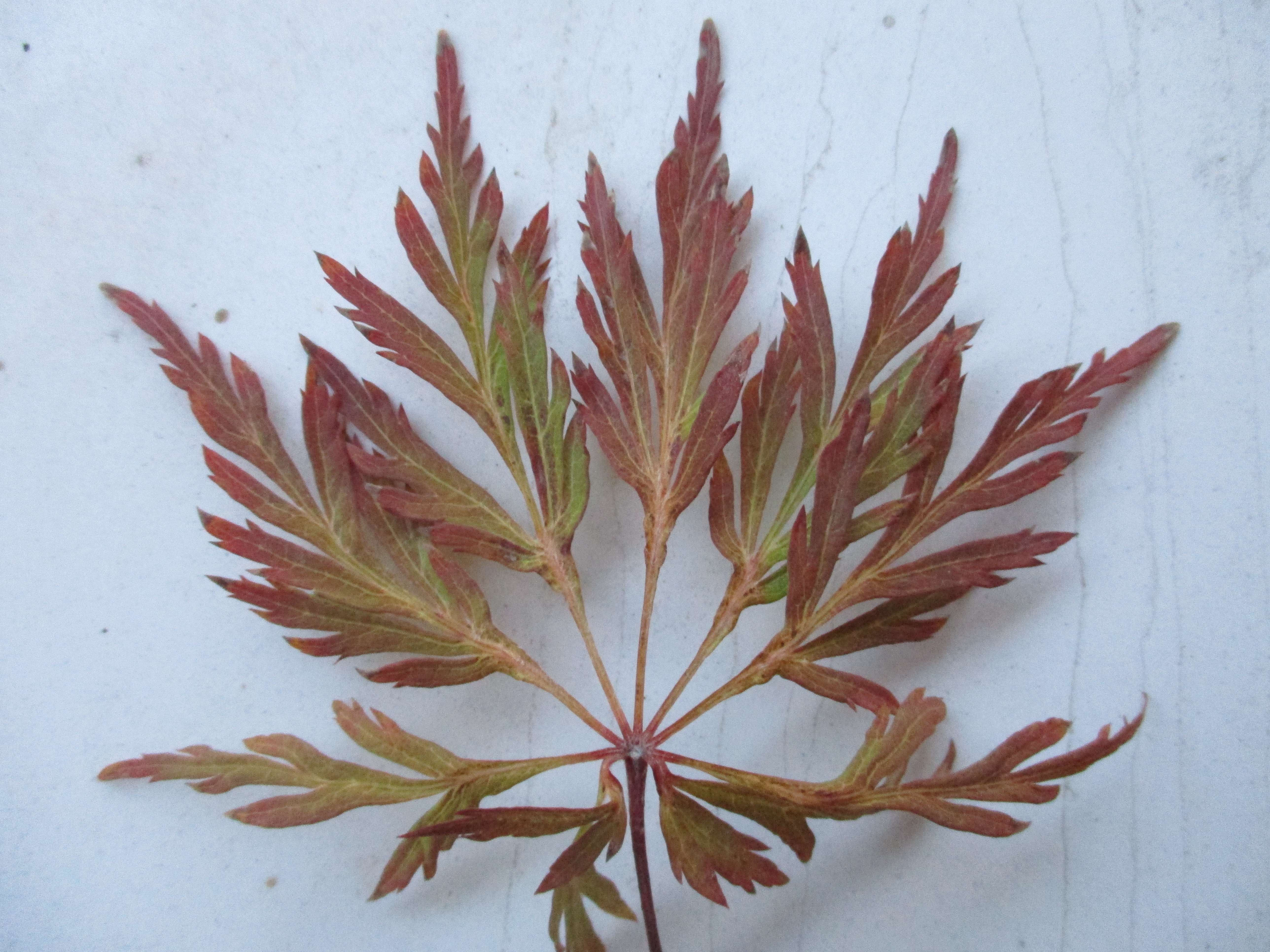 Okay; so this is neither the first, nor real autumn foliar color. It just happened to be convenient for me to get a picture of. Someone left this unfortunate Japanese maple right outside on the driveway a few years ago. It colors early from uncomfortable exposure to late summer warmth. The picture below is even more colorful, and was from even earlier in the year, last August.

Foliage that is starting to color here is nothing to brag about. Some of the older dogwoods leaves just shrivel and turn brown. I can only hope that enough newer foliage lingers to color as well as it did last year. Cottonwoods start to drop foliage while it is still green, but should eventually color to a subdued yellow before the last foliage falls. Sycamores are bland no matter how late.

There are only a few trees that reliably develop vibrant foliar color in such mild autumn weather, and only a few of such trees happen to be in our landscapes here. We lack Chinese pistache, flowering pear and ginkgo. The few sweetgum that are scattered about provide most of the foliar color here in autumn. It is still too early for them to color though. They need a bit more chill.

Flowering cherry and dogwood, which are uncommon just a short distance farther inland, happen do do quite well for us, and mostly color remarkably well in autumn. They only need a bit more time and chill. Birches are not as colorful, but are bigger and bolder, and eventually cover the ground below with delightfully yellow foliage. Boston ivy was added only earlier this year.

Native flora does not contribute much color. Bigleaf maple turns only a soft yellow. Poison oak turns rich deep red, but there is not much of it. 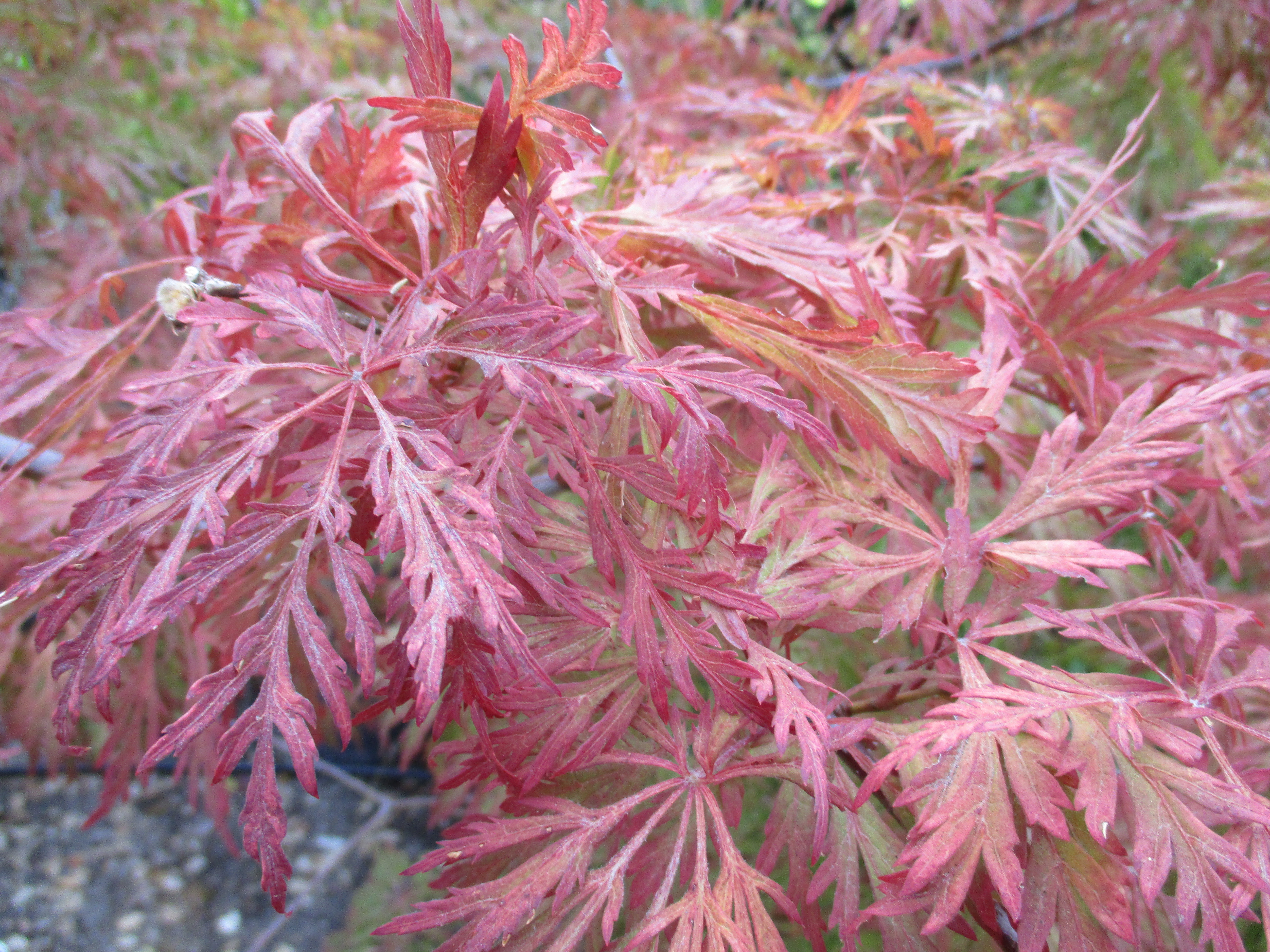 These are the last six of the twenty four pictures of autumn foliar color that I got before the rain knocked so much of the foliage to the ground more than a week ago. #2 is the only picture of foliage that is on the ground instead of still suspended on the stems that produced it. The fallen birch leaves were just too pretty on the stone wall to not get a picture of them.

1. Japanese maple is not my favorite species, but it does have certain attributes. There happen to be several at work just because they happen to work well there. Some that do not typically develop good color got remarkably colorful this year. I believe that this particular Japanese maple is the common ‘Bloodgood’. It had been dark reddish bronze through summer, and then turned brighter red for autumn.

2. European white birch is grown for the elegant white trunks that contrast so nicely against the deep green of the redwoods. This autumn foliar color, although brief, is an added bonus. These trees were already starting to defoliate before the rain. 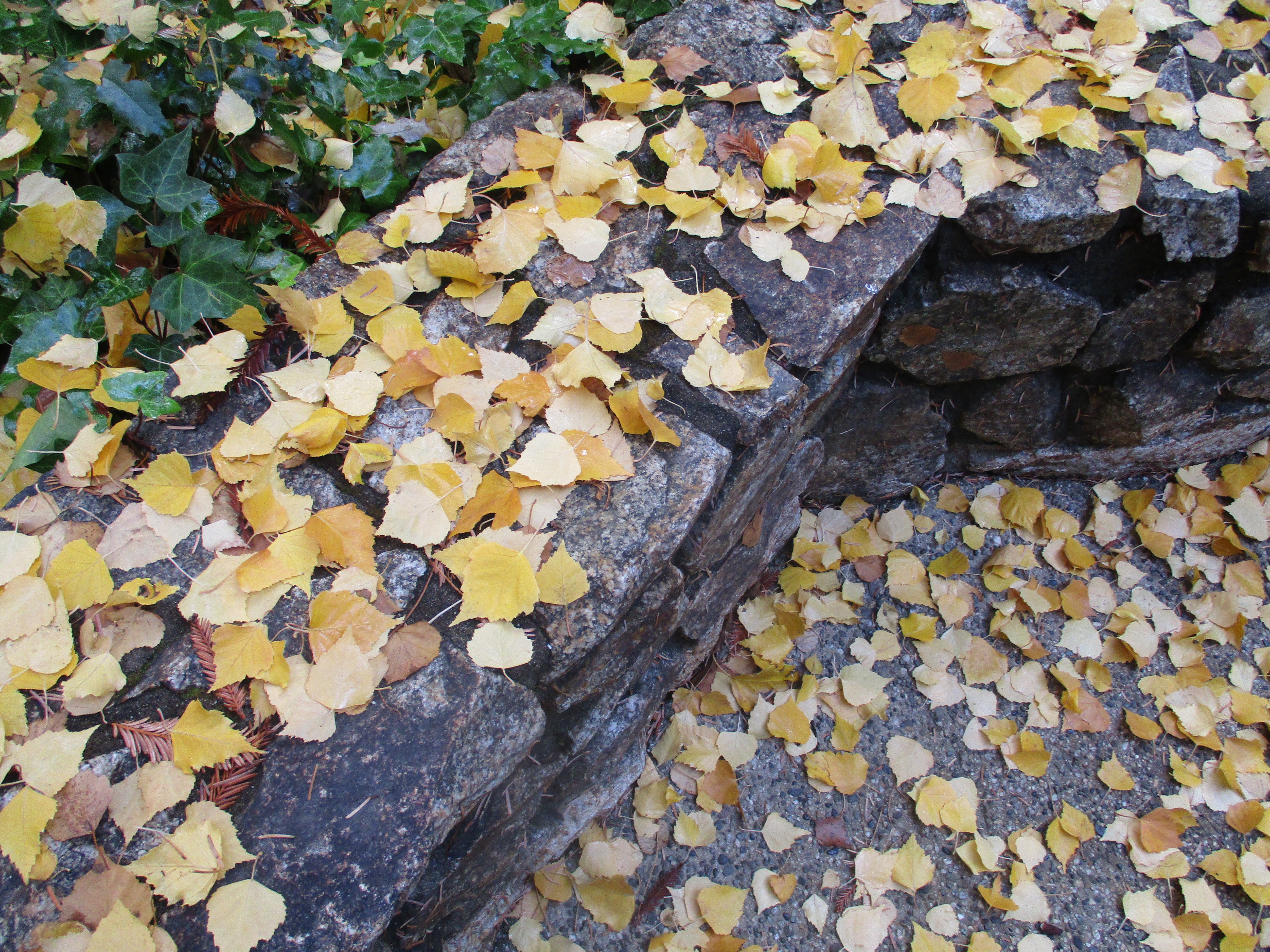 3. Hydrangea is not known for autumn foliar color, and as you can see, turns only pale yellow. Yet, it is striking in the shade, and contrasts nicely with the rich green of redwood and English ivy foliage.

4. Spirea is likewise not grown for autumn foliar color, or at least no so much in our mild climate. There are more than a dozen of them here, and none are doing very well. They will get cut back and groomed now that they are bare. I do not know what cultivar this particular spirea is.

5. Golden weeping willow was not only golden with autumn foliar color, but is still golden with the yellow bark on the twigs. So far, I am not too impressed with the yellow twigs. It is still a small tree, and growing in a mild climate that may not stimulate much color. Regardless, I happen to like weeping willows. This one happens to be in a swampy spot where it is quite happy.

6. Bald cypress is rare here, but there happens to be two at work. One was supposed to be a dawn redwood, but was obviously mislabeled. Fortunately, it just happened to be planted on the bank of a small creek where it gets plenty of water. The other was planted in an area that is too swampy for other trees. Both are doing quite well. When they defoliated, they covered the ground with finely textured needles that would have been impossible to rake up.

It is certainly not my favorite small tree. Actually, in most situations, I rather dislike it, which is why I sometimes accidentally spell it without the first ‘e’. It is a cop out; a micro tree that too often ends up where a larger and more respectable tree would be more appropriate. They are not shade trees. They are not not big enough for freeway landscapes or to be street trees on wide boulevards. They are not immune to diseases and insect infestations; and they commonly drop honeydew from aphid or scale infestation, and lose their bloom to powdery mildew. They are not ‘low-maintenance’, and really should be pruned more than they are, but will get you in trouble with the neighbors if you prune them as aggressively as they should be pruned.
They are popular because of their potential for remarkably flashy bloom, and because they do not get big enough to damage the sidewalks and curbs that they are so often planted next to. ‘Gardeners’ like them because they survive their neglect. That is no long list of attributes; but there is one more.
FALL COLOR! On a bad year, they merely turn bright yellow. This year, some are this exquisitely bright orange with a slight red blush. The various cultivars display various colors, so some are more colorful than others. They are also on different schedules, so the most colorful are not necessarily the most colorful every year. Those that colored early are already bare, but could be the most colorful next year if the weather turns cold early. A bunch in town that are also defoliating as fast as they color because of the recent rain, could be the most colorful next year if rain is delayed later than it was this year. 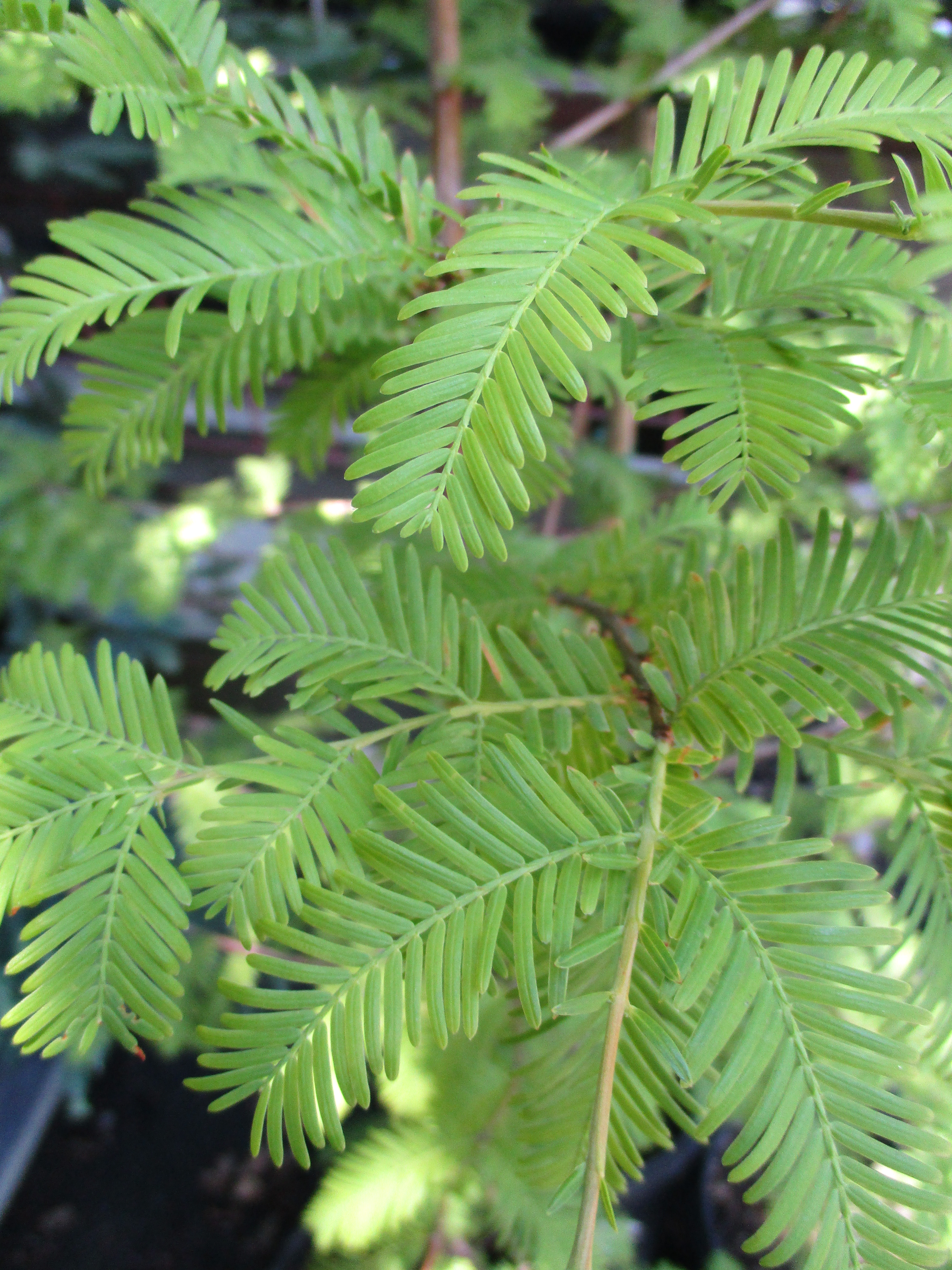 Upon closer inspection, it is not as similar to coastal redwood as it initially appears. Besides being deciduous, the foliage of dawn redwood is softer and lighter grassy green. Individual leaves are more perpendicular to the stems. Trunks are more tapered, so that they are quite lean up high, and quite plump down low. Old trees can form buttressed trunks. Strips of bark might exfoliate.

Dawn redwood is by no means a deciduous alternative to the evergreen coastal redwood. Although it grows about as fast while young, it slows with maturity. Crowded trees get taller but lanky. Exposed trees stay shorter and broader, but because they are still relatively narrowly conical, they do not make much shade at first. Old trees are more than a hundred feet tall, but could get taller. 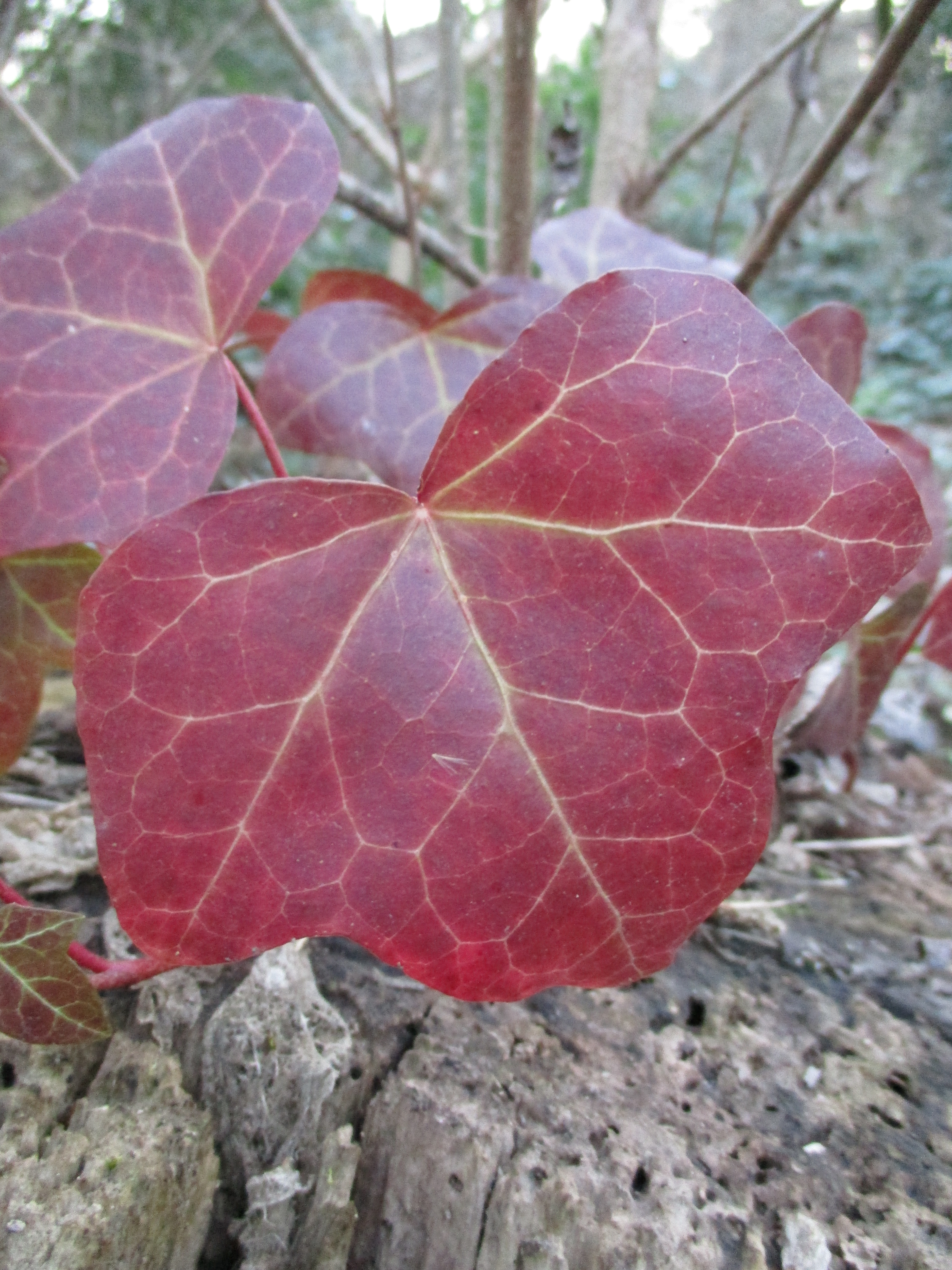 There is a time for everything, and a season for every activity under the Heavens:

Perhaps it was omitted for brevity. Of course, there is the possibility that it was omitted to avoid confusion. If it had been cited, it might have been described simply as ‘foliar color’ rather than ‘autumn foliar color’. Some foliage colors earlier if distressed. Some foliage does not color until frosted. Some might even delay color until it is in the process of getting replaced by new foliage. Then there are the many sorts of evergreen foliage that do not color at all, or at least in a manner that is visible or notable from outside. Shedding browned or blackened dead foliage, particularly that which is obscured by new foliage, does not count.

This English ivy foliage is the sort that should not color at all. Old leaves should whither and deteriorate once obscured by new foliage. Perhaps the vine is concentrating resources elsewhere while abandoning this section. Perhaps the entire vine is deteriorating. From this picture, it is impossible to determine why this colorful foliage is exposed.

Perhaps this is the time to just appreciate nice autumn foliar color wherever and whenever we get it, even if it is on English ivy in winter. As the flowering cherries try to convince us that it is spring, that would be just fine too. This can be the time for autumn, spring, and maybe even winter if it ever arrives, all at the same time.