The first half of the name sound appealing enough. The second half, not so much. Do the seeds grow into snails? Do they just look like snails? Not many have seen them. Tiny pale white flowers that are supposed to bloom in spring, as well as small black berries that develop after bloom, are rare. Laurel-leaf snailseed, Cocculus laurifolius, is grown just for its glossy evergreen foliage.

The foliage superficially resembles that of common privets. Upon closer inspection, the leaves are somewhat elongated, and outfitted with distinct marginal veins flanking the midveins. As stems that become heavy with lush foliage lean over, vigorously vertical stems fill in the space, until they too arch over as they become fluffy with foliage. Mature trees might get twenty feet high and wide.

Because of its complaisant roots and tolerance of partial shade, laurel-leaf snailseed is popularly installed as a foundation plant (at the foundation of a home) but then obscures windows as it gets too big and awkward. Its arching branch structured does not do well with formal shearing. It works much better as an informal screen in the background, or as small tree with multiple trunks.

With indiscriminate pruning, glossy abelia, Abelia X grandiflora, will never develop its natural form, with elegantly long and thin stems that arch gracefully outward. Sadly, almost all get shorn into tight shrubbery or hedges that rarely bloom. If only old stems get selectively pruned out as they get replaced by fresh new stems, mature shrubs can get eight feet tall and twelve feet wide.

Against their bronzy green foliage, the tiny pale pink flowers that bloom all summer have a rustic appeal. In abundance, they can be slightly fragrant. The tiny leaves are not much more than an inch long. Vigorous young canes that shoot nearly straight out from the roots slowly bend from the weight of their bloom and foliage as they mature.

Partial shade is not a problem for glossy abelia, but will inhibit bloom somewhat. Young plants want to be watered regularly. Old plants are not nearly so demanding, and can survive with notably less water. If alternating canes is too much work to restore old and neglected plants, all stems can be cut back to the ground at the end of winter. New growth develops quickly.

Plants are usually well suited to the climates that they are native to. Glaucous (slightly reflective grayish) foliage is more common in harsh climates where darker green foliage might get cooked by the sun. Pendulous growth is more common among plants that want to shed heavy snow efficiently. Kashmir cypress, Cupressus cashmeriana, has both, but is from a tropical monsoonal climate.

It is a stately tree that can eventually get taller than fifty feet. Within its native range in the eastern Himalaya, old trees can get three times as tall! Limber stems might hang downward several feet. The minute scale leaves are neatly set on limber stems arranged in flat sprays, similar to, but more defined than those of arborvitae. Foliage is silvery grayish green, and perhaps slightly bluish.

Mature trees do not need much water, but would probably be happier if watered occasionally through summer. Kashmir cypress is unfortunately susceptible to the same diseases and insects that afflict Leyland cypress. That is a serious risk to consider before planting prominent specimens. Incidentally, Kashmir cypress is also known as Bhutan cypress, and is the national tree of Bhutan.

The many cultivars of arborvitaes of home gardening have been so extensively bred and selected that only the foliar texture resembles that of their ancestors. ‘Emerald Green’ which is also known by its Danish name ‘Smaragd’, is a cultivar of arborvitae that was developed from the white cedar, Thuja occidentalis,which grows wild from Minnesota to New Brunswick, as a forty foot tall tree!

‘Emerald Green’ grows quite fast while young, but should get no taller than about fifteen feet, and no wider than about four feet. It is one of the best columnar arborvitaes for tall hedging. Although they can be shorn, they are so dense and uniform that they are at their best if only occasionally trimmed of stray stems, or to keep taller specimens from getting too much taller than shorter ones.

The tiny evergreen scale leaves are tightly arranged on vertically arranged flat foliar sprays. Foliage is quite dense, and softer than that of most other conifers. A bit of shade is tolerable, but too much compromises foliar density. Bloom is barely noticeable, and seeded cones are not much to look at. The shaggy ruddy brown bark is handsome but seldom seen on well foliated specimens. 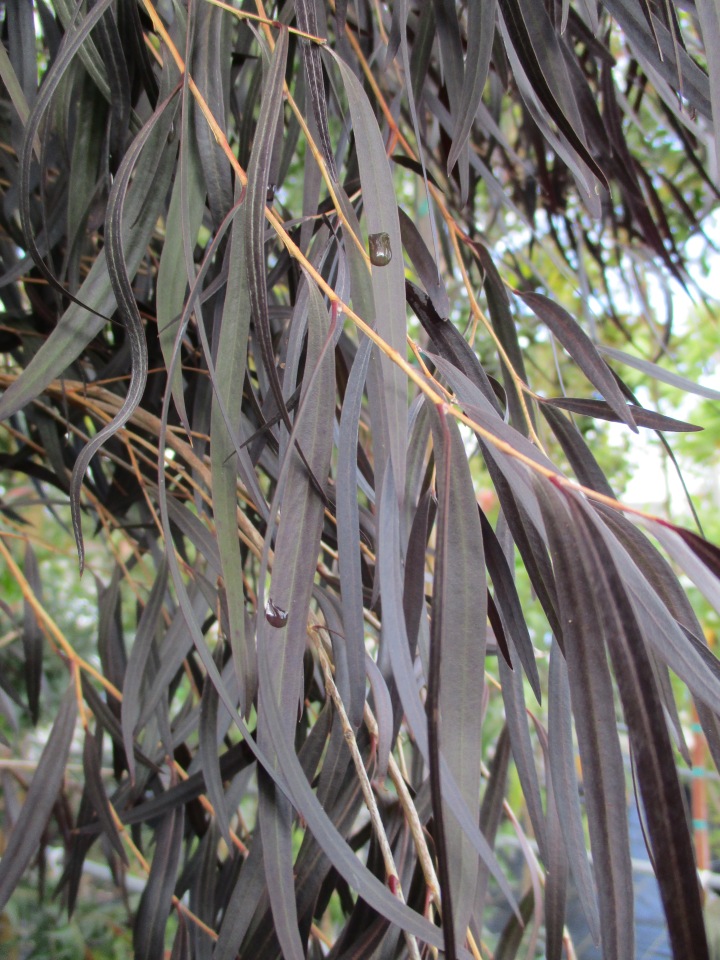 Fans of the Brady Bunch might recognized agonis, Agonis flexuosa, from the front yard of the Brady Residence. That particular tree was rather dark olive green, and might have grown two or three feet annually to reach the upstairs eaves. Most of the popular modern cultivars are darker bronze or burgundy, and probably stay a bit shorter, but attain the same elegant and slender form.

The narrow evergreen leaves hang softly from limber stems, like the foliage of weeping willow. Anyone who has pruned agonis has likely noticed that the foliage is aromatic if disturbed. The tiny pinkish white flowers that bloom in spring or summer are not much to look at, but can be fragrant if there are enough of them. The fibrous and furrowed bark is quite distinguished for a small tree.

Agonis is not too demanding as long as it gets enough sunlight. It will lean away from shade. It prefers to be watered somewhat regularly through summer, although established plants can be quite happy if watered only a few times. Too much water rots their roots. If pruned to promote branching while young, and pruned for confinement as it matures, agonis can be a striking unshorn hedge.