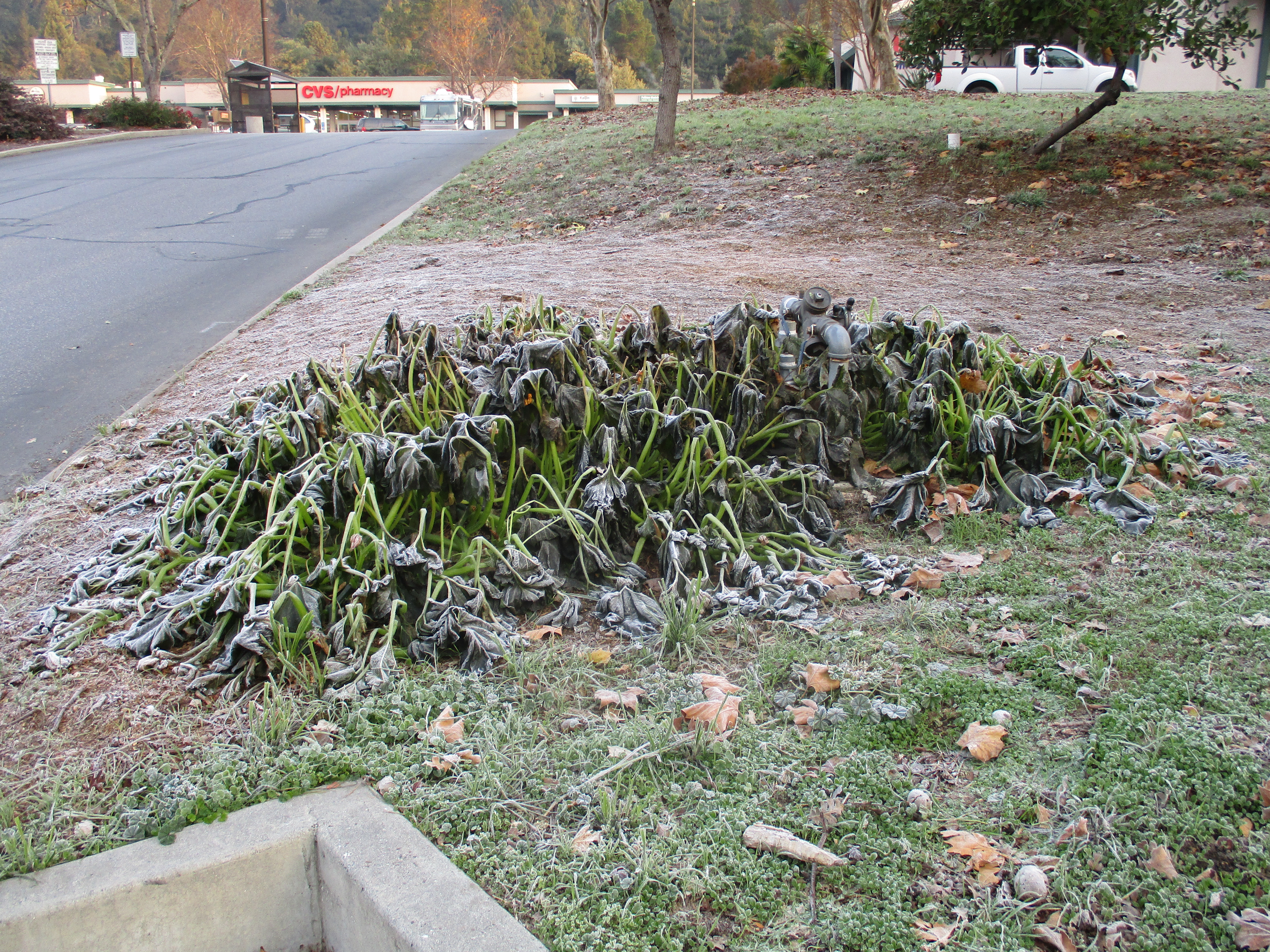 Yes, we get it too. It took a while, but we finally got it just like most of everyone else in North America and the Northern part of the Norther Hemisphere. It is not much to brag about, but it is enough to melt the big feral pumpkin vine that I wrote about earlier ( https://tonytomeo.wordpress.com/2017/12/03/too-late-for-pie/ ). It has actually been frosting for a few nights. I just got around to getting this picture this morning.

Now that the foliage is melting and collapsing, a leak is now visible in the exposed valve manifold that was obscured in the previous picture. It did not get cold enough to freeze the pipe, so the water was dripping freely. This confirms the earlier theory about where the pumpkin vine was getting water from.

Two pumpkins are also exposed by the collapsing foliage. They were not visible earlier. Unfortunately, they are too under-developed…

Frost was something of a nonissue for some of us this winter. For those of us in milder climates, in rarely is. Those who limit selection of what grows in their gardens to species that are resilient to frost need not be concerned with it. Those of us who enjoy gardening a bit too much are more likely to grow a few marginal species that would prefer to be somewhere with milder winter weather.

Protection from frost might have been a concern prior to the onset of cold weather. Then, there was more concern for the few plants that might have been damaged by frost. Grooming and pruning of damaged foliage and stems needed to be delayed until after the threat of subsequent frost. Now that it is so late in the season, subsequent frost is very unlikely. It is safe to clean up any mess.

Not only is it now safe to prune and groom frost damaged plants, but such procedures should not be delayed while affected plants recover. The same frost damaged material that provided a bit of protective insulation earlier would now interfere with the healthy development of new stems and foliage. Pruning can now promote new growth that was preferably delayed through colder weather.

Because the weather has been so pleasantly mild for quite a while already, new growth may already be developing among some frost damaged plants. Damaged material should be removed as carefully as possible to limit damage to such new growth. Many perennials that were not damaged this year might be pruned as if they were, to remove tired old growth, and promote new growth.

Many of the dormant spores of fungal and bacterial pathogens that overwinter in old foliage will be removed as such foliage gets groomed away.