As much as I dislike fads, I think this is one fad that could have lasted longer that it did three years ago.

Macabee Gopher Trap was invented in Los Gatos. So was the Bean Pesticide Sprayer. Both were very useful in the vast orchards that formerly occupied the Santa Clara Valley. Another one of the more famous invention that originated in Los Gatos was not so practical. Actually, it was weirdly impractical. What was weirder was that it became such a craze in 1975 and early 1976.

It was the Pet Rock.

1. Pigeons don’t lay eggs in December. They certainly don’t lay such big eggs, or leave them without a few twigs to keep the from rolling away. Now that I think of it, pigeons don’t live here.

2. Oh, it is just a rock, painted by someone named Madeline. Perhaps, it is a Pet Rock named Madeline. It seems to be of impeccable breeding. Form, color and temperament are exemplary.

3. Perhaps it was painted by someone named Joy, or it is named Joy. Well, whatever or whoever it is, it seems to be very important. It was put back in the hanging basket of zonal geranium.

4. That’s the hanging basket with the zonal geranium in it, right there, second from the left. It is not exactly a good place for a Pet Rock to nest. Notice the plaque over the rail right below it.

5. The plaque identifies all three species of redwood in the landscape. The green, blue and brown dots next to the names correspond to a diagram showing where each is within the landscape. 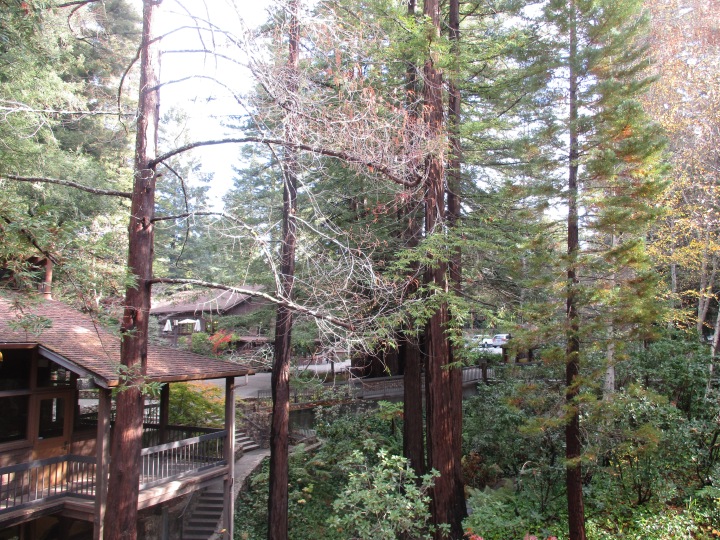 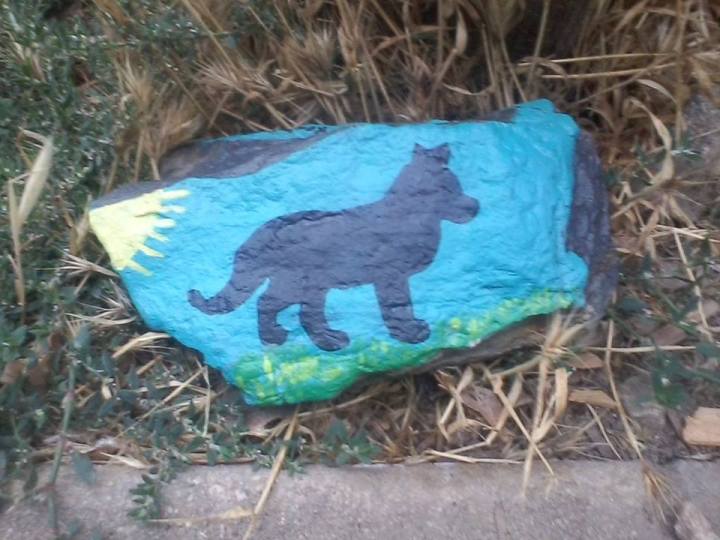 This has very little to do with gardening; but like I said in the description of this blog, anything goes when it comes to the ‘Elaborations’ category. Anyway and furthermore, I do not like to write about garden sculpture, garden art, or any of those knick-knack fads that involve putting more than plants and the necessary infrastructure to sustain them into the garden. I do happen to like certain tasteful garden statuary, like Saint Francis, or Saint Fiacre (the rarely seen ‘real’ patron saint of gardening) or any of the saints; but only if I have a suitable space for them. This is nothing like that; but is just excellent enough that I wanted to mention it.

Painted rock are appearing everywhere! They are cute. They are weird. They just might cheer you up if you happen to find one. If you like, you can take them home to put in your garden for a while (if they seem to be intended for that. Please do not steal rocks from someone’s garden.). You might want to just put them somewhere else to make someone else a bit happier, or just make them . . . wonder who has time for this sort of thing. Heck, you might just want to leave them where they are.

Many rocks have directions to follow them online. You can post selfies with any rock you find. You might provide clues about where you put it for someone else to find. You might be able to see where particular rocks came from, or where they go to. Some end up far from home. If you like, you can paint your own rocks and add them to the mix. You just might see it online somewhere. You may only know that it brightened someone’s day, but never hear from it again.

There are very few common sense rules. Basic guidelines can be found at Facebook pages about art rocks in all sorts of communities. Two that I found are Santa Cruz County Rocks at https://www.facebook.com/groups/1354197601364064/?ref=bookmarks or Trona, Ca ROCKS! at https://www.facebook.com/search/top/?q=trona%2C%20ca%20rocks! (These are not actual links. You need to be logged into Facebook for them to work.)