Much of my work involves street trees. They need more of my kind of attention than most other trees. They must conform to more restrictive limitations. They endure more abuse. They are the most prominent trees on urban properties. Because some are assets of their respective municipalities, they are more stringently protected by local ordinances than other trees are.

I planted quite a few street trees too. While selecting trees for the medians of San Vicente Boulevard in Los Angeles, we considered the clearance of the lowest limbs above the highest truck traffic, the docility of roots under curbs and pavement, the potential for foliar debris, the resiliency to neglect, and the resistance to pathogens. Those were just some of the major concerns.

We sort of wanted them to look good too.

Ginkgoes, at least modern (fruitless) cultivars, work well as street trees. They are tall and slender, and can be pruned for clearance above streets and sidewalks. Their roots are reasonably complaisant, and take many years to displace concrete. ginkgoes defoliate neatly in autumn, with no debris for the rest of the year. They are resistant to pathogens and tolerant of neglect.

They also look great in their monochromatic but brilliant yellow fall color. (Try to not notice all those utility cables.)

This pair of ginkgoes is in front of an old home in town that was formerly the office of the Los Gatos Weekly Times, before it expanded into the larger Silicon Valley Community Newspapers group. Two decades and one year ago, this was where I dropped off the first of my weekly gardening columns, first as hard copy on paper, then on floppy discs. The trees were smaller then.

One day back in about 1999 or so, I stopped by on my way back from delivering rhododendrons and other horticultural commodities from the farm. I was driving the big delivery box truck. I realized how important adequate clearance is when the truck tore a significant limb from the tree on the left. The tree and I both can attest to the resiliency of the species to such abuse.

One never knows what strange artifacts might be found out in public landscapes. It is amusing enough to find items discarded or simply misplaced long ago by former occupants of a home out in a private home garden. Public landscapes are even more interesting, since they collect debris and artifacts from many more people. Some landscapes have been doing so for a long time.
Besides litter, the most commonly found artifacts are sporting equipment. Frisbees, baseballs, tennis balls, soccer balls, volleyballs and such are commonly lost in dense vegetation. Golf clubs, baseball bats and tennis rackets sort of make one wonder. Chew toys are sometimes left by dogs who go after them, but then return with something they perceive to be more interesting.
Landscapes that are near roadways often feature car parts that might have fallen out of cars as they drove by, as well as a few that cars could not have driven by without. Obviously stolen items, such as purses and wallets, often surrounded by a few credit cards that they likely contained sometimes appear. Stolen mail might fit into that category.
I have yet to find anything as interesting as tickets to a San Jose Sharks game, a big bag of money, Elvis, a purple dinosaur from another plant or a flying saucer that brought it here. However, I have found evidence of time travel!
A retaining wall that holds back an embankment above a parking lot at work was apparently constructed by Mike Menard in 1982, who left his name and the date inscribed into the concrete on top of the wall. That by itself is nothing too remarkable. What IS remarkable is that an adjacent retaining wall was constructed four hundred years later, and three hundred and sixty-four years from now, in 2382!

Concrete gets poured into our gardens as a liquid like slurry of cement and sand and gravel aggregates that cures into a stone-like solid. It is not ‘cement’, but cement is the component that binds it all together. Almost all modern concrete is reinforced with steel of some sort to prevent it from breaking as easily as old unreinforced pavement does. It can be as permanent as we want it to be.

Concrete is used to pave patios, driveways and sidewalks, and gets molded into stairs, curbs, and the foundations and slabs for our homes and garages. The visible surfaces of concrete can be colored, textured or outfitted with stone to look better in the landscape than simple bare concrete. It is relatively ‘low-maintenance’, but should sometimes get swept or blown if debris accumulates.

Concrete is a versatile and durable material, but is no more perfect than anything else in the garden. It inhibits percolation of moisture and gas exchange in the soil below. Because it is inflexible, it fractures if displaced by roots or settling soil. Glare from paved surfaces can enhance sun exposure enough to roast sensitive foliage and exposed bark. Certain foliar debris can stain concrete.

Concrete limits plant selection. Conversely, the presence of mature trees limits the location and quantity (surface area) of concrete to be installed. Trees with aggressive roots or big trunks should not be planted so close to concrete that they will have no choice but to displace it. Root barriers help with mid sized trees, but are not always effective forever. Dogwoods,Japanese maples and other plants with sensitive foliage or bark, are more vulnerable to exposure if concrete around them is also exposed.

After all the years it was out there, someone, somewhere must have gotten good pictures of it. I never did. Nor did anyone I know. It was something of a famous landmark in Santa Clara.

First, I should explain these pictures that my niece sent from here Mid City Heights neighborhood in Los Angeles. As you can see, this is a well kept middle aged home with minimal setback from the sidewalk. It is in a delightfully tree shaded neighborhood of comparable homes.

What are those black and white silhouettes of city skylines on those two plastic panels in front, you ask? They are a fence. Seriously. There are several similar panels around the perimeter of the front yard, at the edge of the sidewalk, and up the sides. They depict a variety of familiar landmarks, such as the Golden Gate Bridge, the Space Needle, the Eiffel Tower, the Tower Bridge and so on. They are all jumbled together so that landmarks from cities that are thousands of miles apart can share the same skyline. Mount Rushmore is depicted on the gate, adjacent to a city skyline that features both the Gateway Arch and the Sydney Opera House. Someone actually paid a lot of money to get this fence constructed and installed around the front garden of their otherwise well tended home. But wait; there’s more.

The picture below shows what lurks behind the fence. It was actually worse before the fence was built, when it was in full view. As tacky as the fence is, at least it obscures it. ‘It’ is a fountain; but not just any fountain. This picture does not do it justice. It really should be viewed at night, when it lights up with disco lights and emits eerily illuminated water vapor. It sometimes plays music. Yes, someone really though it was a good idea to put this in the front yard, where, before the fence was built, it was visible to anyone in the vicinity. 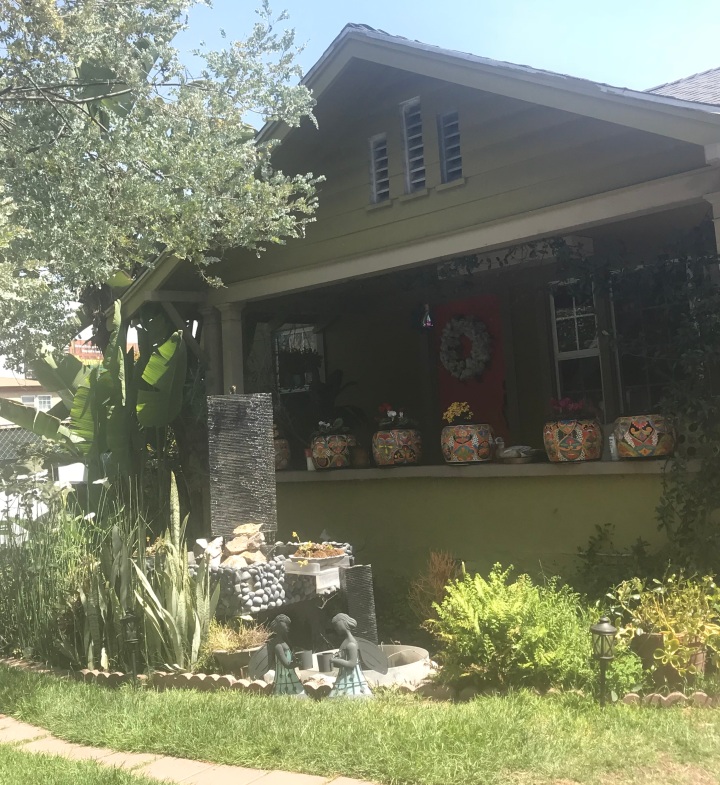 Now, getting back to the mower. It did not work. It probably worked at one time. It was an old mower, from before the mid-1960s or so. The person who owned it apparently did not like using it, but did not want to get rid of it either.

He had it bronzed. Yup. Bronzed. The front garden of his mid-1950s tract home in Santa Clara was paved with exposed aggregate concrete, with a big pedestal in the middle, on which, the bronzed mower was proudly displayed. The concrete was of exceptional quality, and would have made a nice patio if it had a bit of landscaping around it. Instead, it was surrounded by only a simple but tasteful low iron fence with tan slumpstone pillars. The fence surrounded the perimeter of the front garden, at the edge of the sidewalk and up the sides. There was no plant material in the front garden. None.

The mower debuted sometime about 1970. The kids of my generation do not remember it not being there, so it was there as long as any of us can remember. Some of our parents believe it might have been there as early as 1964. The home and paved front yard were always impeccably maintained.

In about 1995, the home sold. It actually sold rather quickly because it was in such good condition. Everyone thought that whomever purchased it would remove all the pavement and the mower, and landscape the front garden. But no. They moved in, painted the home a different color, and maintained the front garden as it had always been maintained. What is the point of living in such a nice home in such a nice neighborhood with such nice soil and in one of the best climates on in the World if the garden is paved?!

Only a few years ago, the home was sold a second time, and those who purchased it finally removed all the concrete and bronzed mower, and outfitted the home with a simple but presentable landscape that is more compatible with the rest of the neighborhood.

The funny thing is that everyone in that neighborhood had lived with the bronzed mower for so long that it was somewhat saddening to see it go! We all knew why it needed to go, and that the home looks so much better without it, but it was familiar. It was cool in a weird sort of way. It was defiant. It certainly was unique. It was environmentally responsible, and about as drought tolerant as it gets.

It is still impossible to imagine that the black and white plastic ‘city skyline’ fence and steamy disco fountain within will ever be so appreciated; but who knows?