Italian Americans, particularly Californians, are expected to be experts in regard to wine. I am not. I can not explain it. I dislike wine, especially the best of it. It smells and tastes like rotten grapes. When I learned that Chilean wine palms were, and might still be, decapitated for the collection of their sap, from which wine is made, I learned yet another reason to dislike wine.

This little Chilean wine palm, Jubaea chilensis, pictured above, lives just a block or so away from the bad date palm that I wrote about last Sunday. No one here will try to make wine from its sap. The utility cables that seem to be too close in the background actually pass with plenty of clearance to the right, so will not be a problem in the future. This young palm should be safe.

Although I have encountered too few of the species in my career to be completely certain that this little palm is a well bred Chilean wine palm, it is very convincing. I see no indication that it is a hybrid of another species. About half of the Chilean wine palms that I encounter are hybrids. Most of these are hybrids of queen palm. Others are hybrids of pindo palm. Both look weird.

Of course, well bred Chilean wine palms are not much better. The specimen pictured below demonstrates that, regardless of how bold and striking they are, they are still rather weird palms. That is probably why they are so rare now. They were rare even during the Victorian Period, when weird species were trendy. Yet to many, their distinctive weirdness is part of their allure.

I can not help but wonder where this Chilean wine palm came from. Someone must really appreciate it to put it here.

Of all the strange seed I brought back from Oklahoma, none were from the scrub palm, Sabal minor, that is endemic to McCurtain County in the very southeaster corner of Oklahoma. I did not get to that region.

Sabal minor is nothing special to those who are acquainted with it. However, a variety that was selected from those in McCurtain County, which is known simply as Sabal minor ‘McCurtain’, is becoming increasingly popular in climates where winter weather is too cold for other palms. It is sufficiently resilient to frost to survive in New England and Canada.

I just wanted it because it is from Oklahoma.

Since I did not collect any wild seed, I had considered purchasing a seedling of the ‘McCurtain’ variety online. It would have been rather expensive for a single seedling. I was pleased to find seed of the same variety that were significantly less expensive for several seed. I know they grow slowly, but I am in no hurry. I gain bragging rights as soon as the seed germinate.

For $6.00, I expected delivery of a packet of ten seed of Sabal minor from McCurtain County. I could not pass on a deal like that. Instead, I got the 104 seed in the picture above! That is ten times what I was expecting. They will grow into more scrub palms than my garden can accommodate. RAD! 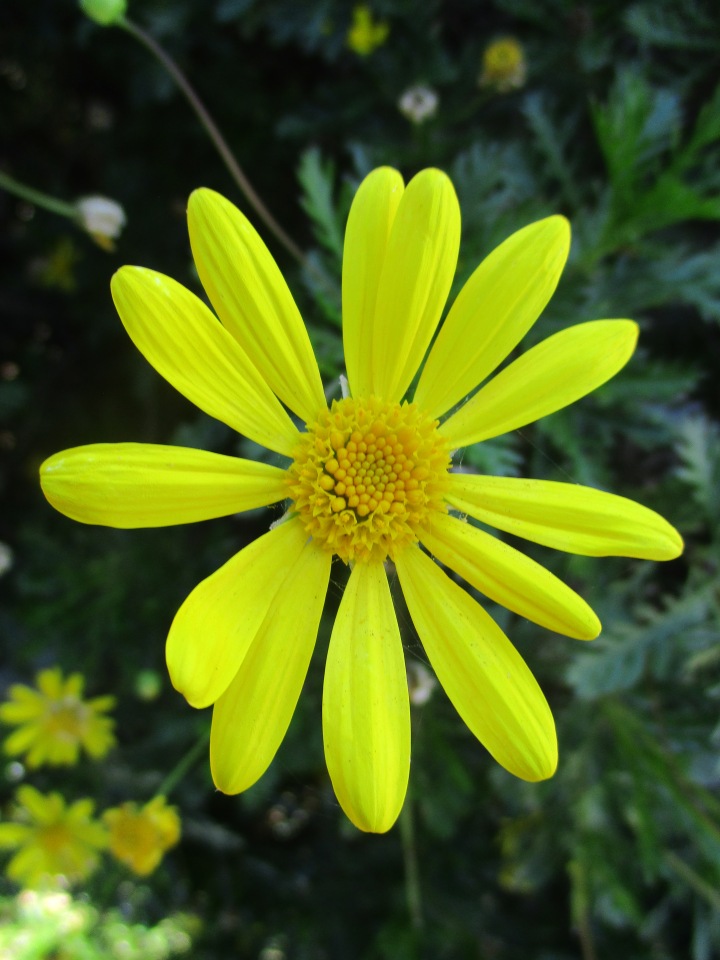 No, this is not a Paris daisy. It is a common euryops daisy, Euryops pectinatus. It is obviously related, but the flowers are bright yellow rather than clear white with yellow centers, and the foliage is darker green. It is more resilient, so became more common in landscapes as quickly as mow, blow and go ‘gardeners’ replaced real gardeners who actually know something of horticulture. There is certainly nothing wrong with it. It is just cliché.

The few remaining Paris daisies are fancier cultivars of the old fashioned traditional sort anyway. Some bloom pale pink. Some bloom pale yellow. Flowers might have fluffy centers of the same color. Foliage might be pale grayish green. Plants are more compact. The cultivar that most closely resembles the old Paris daisy has more profuse, but smaller flowers. The cultivars are all quite nice, but are not quite the same as what we remember.

The original Paris daisy, Chrysanthemum frutescens, which is now known as Argyranthemum frutescens, was the sort of flower you wore in your hair if you were going to San Francisco in the late 1960s, or according to my memory, in the very early 1970s. It looked just like the three plastic daisies in the upper right (or lower left) corner of those cool AstroTurf door mats that were so popular. Perhaps they were cliché for their time too.

Cuttings rooted in half pint mason jars on kitchen windowsills to replace older plants. Our mothers grew them in the garden, supposedly to repel the bad insects, and attract the good insects to eat the bad ones who did not take the hint. In that regard, Paris daisies were how young horticulturists learned about vegetative propagation and ‘integrated pest management’ (IPM). They were so familiar back then; but then disappeared by the 1990s.

Only recently, Brent, my colleague in the Los Angeles region who I so frequently mention (typically in a disparaging manner) found just two specimens at a nursery in Southern California, and promptly procured both. One if for his garden, and one is for mine!

Three or four might be better than two. Perhaps that is what this queen palm was thinking when it decided to get extras.

This is not a good picture, and the tree is a bit too shaggy with old foliage to see what is going on inside clearly. To the left, a secondary limb is curving downward and away from the main trunk, before curving back upward as a secondary canopy. Another limb is developing immediately above this secondary canopy, and another is visible to the right of the main trunk. It is hard to say how many individual canopies are within the collective canopy of this single specimen.

What is weird about this development is that the popularly available palms do not form branches. Think of it. When was the last time you saw a palm tree with a limb or branches? Before you answer that, yuccas (such as Joshua trees) and dracaenas are not palms. Also, clumping palms like Mediterranean fan palm do not form limbs from their main trunks. They merely develop multiple trunks from basal pups.

The very few specie of palm that develop branches regularly are very rare and live very far away. Date palms, either grown for dates or recycled into landscapes from displaced date orchards, have the potential to develop pups higher on their trunks, but rarely do so.

Palms are only trees because they have trunks. Otherwise, they are merely really big perennials, with single terminal buds from which all their foliage, flowers and fruit develop. If deprived of the terminal bud, a palm can not generate a new one, which is why a palm will die if topped.

So why does this queen palm have more than one terminal bud? It is impossible to say.