From formerly dormant bulbs just below where their foliage shriveled in the warmth of last spring, the naked brown floral stalks of naked lady, Amaryllis belladonna, grow fast to about two feet tall. They bloom suddenly with a few or several garish pink lily flowers about three inches long. They are sneaky about it too. Without foliage, and prior to flashy bloom, the bare stalks are easy to miss.

Even though individual flowers do not last long, the collective bloom lingers a bit longer as newer flowers bloom to replace those that bloomed slightly earlier on the same stalks. They are nice as cut flowers. The minimal floral fragrance is usually unnoticed, so can be a surprise if the weather happens to be conducive to the dispersion of the light fragrance of exceptionally abundant bloom.

Foliage does not regenerate until after bloom, and should wait until after the first rain of autumn. Where winters are colder, it waits until early spring, only to die back before summer. The long strap shaped leaves resemble those of lily-of-the-Nile, but are a bit softer. If ruined by frost, they try again. The tops of the two or three inch wide bulbs are visible at the surface of the soil while dormant. 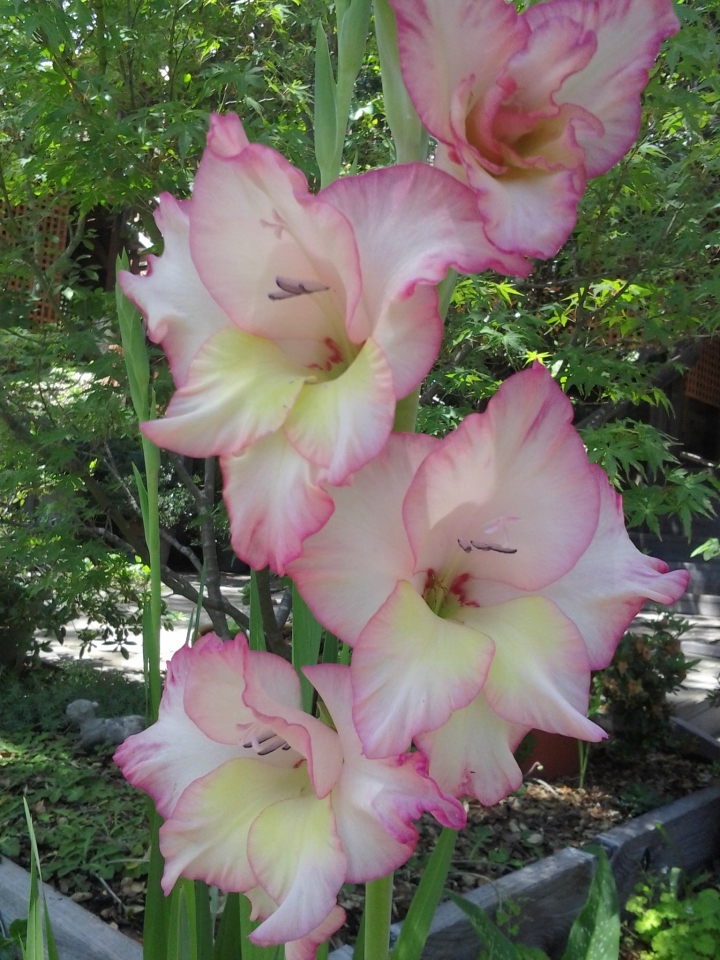 The sword of a gladiator was known as a gladio, and it probably resembled the leaves or floral spikes of gladiolus. These narrow and pointed leaves stand nearly vertical, angling only slightly to the left and right of a single flower stalk that can get as tall as six feet. The floral spike supports several very colorful florets that are arranged to the left and right, but tend to lean toward the front.

The summer bloom can be red, pink, orange, yellow, greenish yellow or white, in bright or pastel hues, and often with multiple colors. Florets bloom upward from the bottom, so lower florets fade before upper florets open. Gladiolus is an excellent cut flower anyway. Taller blooms might need to be staked.

New bulbs should be planted about now, at least four inches deep, and about four or five inches away from each other. Gladiolus want well drained soil and full sun exposure.

Like a timely sequel, bulbs are back. Spring blooming bulbs were available in nurseries earlier, so that they could get planted and disperse their roots through winter, and get ready for their early bloom. Since then, Christmas trees came and went as they were replaced by bare root stock. Now that bare root stock is selling, summer blooming bulbs are arriving for late winter planting.

Summer bulbs are not on the same schedule as spring bulbs. Most of the earliest spring bulb bloom while their foliage is still developing. A few daffodil, grape hyacinth and crocus are already blooming prematurely. Summer bulbs start to grow a bit later and grow a bit slower, and then bloom only after their foliage has matured. Some may not bloom until late summer or early autumn.

There are a few similarities between spring and summer bulbs though. Both groups include plants that develop corms, rhizomes, tubers or tuberous roots instead of bulbs. All are known as ‘bubs’ for convenience. Although very different physiologically, they all function about the same way, by storing resources through dormancy so that they can regenerate within their particular season.

Another similarity is that after spring and summer bulbs bloom, and their spent flowers get pruned away, their foliage should remain until it withers. This foliage is what sustains the bulbs below while they replenish resources to survive through the next dormancy. (Actually, most bulbs replace themselves with new bulbs.) This foliage will want water and fertilizer like any other perennial.

Unfortunately, even with regular watering and fertilizing, the most popular spring and summer bulbs are not really as reliably perennial as they are purported to be. Except for the few types that thrive and naturalize like daffodils (spring) and crocosmia (summer), most bloom very impressively only in their first year, and then bloom meagerly in their second year, if they bloom again at all.

Crocosmia, dahlia, hardy orchid (Bletilla), canna and classic big white calla are the most reliable summer bulbs. Smaller colorful callas are not as easy, but are worth trying. Gladiolus, tuberous begonia and the various lilies are so spectacular that no one minds if they bloom only for one summer. Astilbe, liatris and various alliums work nicely behind where summer annuals will go later.

This link is to the original post to ‘Six on Saturday’ that was about the four dozen or so Gladiolus papilio bulbs that the author of Tangly Cottage Gardening Journal sent to me at the end of last October.

I tried to not get too eager about these new bulbs. I sort of watched their site shortly after planting them, just to make sure they were safe. Once they were planted, nothing else was done there. There was a bit of frost just to let them know what time of year it is. The rain has been soaking the ground for them.

More recently, I noticed that some of the spring bulbs, particularly narcissus, are blooming elsewhere. Daffodils with bigger flowers are just about to bloom. Even though I know that the summer bulbs bloom a season later, I also know that, their foliage starts to develop quite some time before bloom. They are not as fast as spring bulbs, so their foliage may appear months before ultimate bloom in summer. Again, I was trying to not get too excited.

Then on Friday, I needed to remove some licorice plant from the opposite end of the same big bed that the Gladiolus papilio is in. I did not go out of my way, but hey, while there, I went over to just make sure there were no problems where the the bulbs are at. I really did not expect to find these two shoots. They are emerging from bulbs at opposite ends of the row of the five groups of bulbs described in the earlier article. They look like small shoots of common gladiola, like those that emerge from the tiny cormlets that develop next to larger corms, which is exactly what I was expecting them to look like. 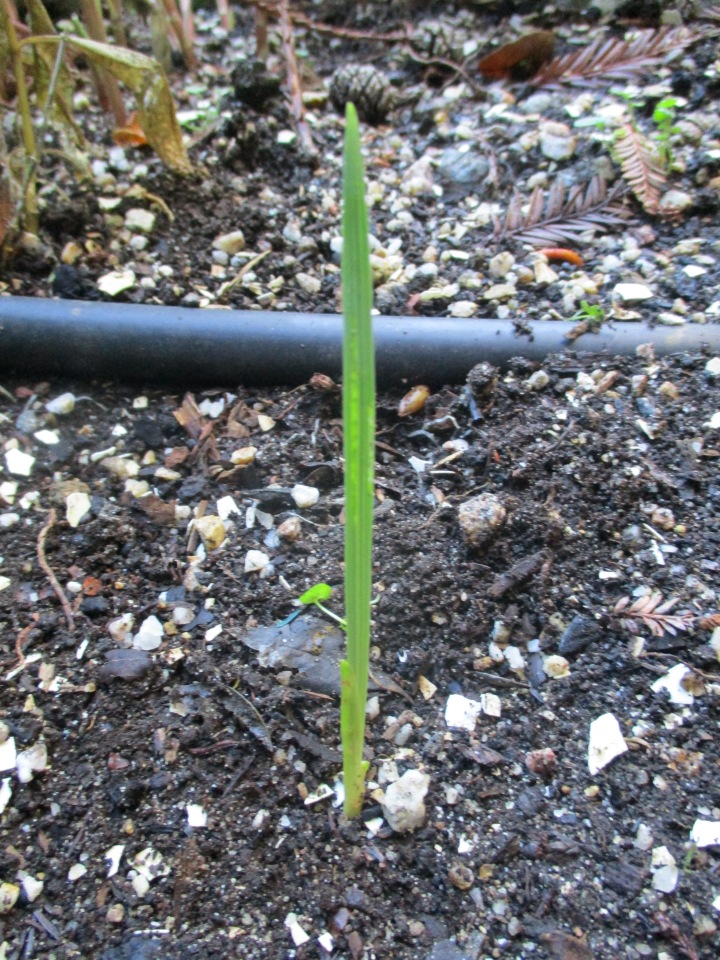