Blowers put the ‘blow’ in ‘mow, blow and go’. They really blow! The only power tool used by so-called ‘gardeners’ that is more detestable to the rest of us is the power hedge shears, and that claim is contestable. Some consider blowers to be worse because they are so obnoxiously noisy, and generate so much dust. Some municipalities have outlawed the use of the noisiest sorts.

The mess on the hood and windshield in the picture above was not actually caused by blowers. The picture below shows the bridge that was power washed above. Oops. I should have been suspicious that no one wanted that parking space. Anyway, this picture was just too funny to not share; . . . and I happen to lack pictures of the sorts of dusty messes that blowers can stir up.

Where I lived in town, the so-called ‘gardeners’ who ‘maintained’ the apartment buildings on either side used blowers. There is a noise ordinance there, but we never bothered to enforce it. We did not want to interfere with what needed to be done. There was a lot of pavement, and we wanted it to be kept clean. We could not expect it all to be quietly swept like I swept mine.

To the north, the blowers were either off or on full-throttle. There was nothing in between. The cars in the carport collected all the dust that was stirred up. If the door to the washroom was left open, debris got blown in, and the pilot light for the only water heater in the building got blown out. Most of the debris got blown to the southeast corner, and under a fence into my yard.

The same happened to the south, but the water heater was less exposed, and there was much more debris. The largest valley oak around lived there, and dropped leaves for several months. I replaced the kickboard at the base of the fence in their northeast corner a few times, but it was just as regularly kicked out and removed so that debris could continue to be blown under!

In other neighborhoods, so-called ‘gardeners’ are notorious for blowing debris out into roads, where it gets dispersed by traffic. Even if they do not blow it away just to become a problem somewhere else, they are likely to blow too much of it into shrubbery, along with any mixed litter. It accumulates faster than it decomposes to benefit the soil and roots below. What a mess!

Personal Protective Equipment. That is what PPE is for. Acronyms can be so vague. PPE could be for Purple People Eater for all we know. That movie just happened to be released to cinema at the end of 1988, just a few months after my summer internship with an exemplary crew of arborists who instructed be about the importance of PPE. I am glad to have missed the movie.

In 1988, the machinery used by arborists as well as lumberjacks was more dangerous, and PPE was more primitive. Hearing protection was only beginning to be standardized. Many of us were not even using it back then, even though the chippers were terrifyingly loud. For some of us, cheap sunglasses sufficed as eye protection. Chaps had been available, but were quite rare.

From the beginnings of their respective careers, younger arborists and lumberjacks learn to use safer machinery and standardized PPE that was still being developed in 1988. Nonetheless, their work is potentially very dangerous. They still work with machines that are designed cut cut down big trees and shred the resulting debris! PPE is just as important now as it ever was.

A notable lack of some of most basic of PPE at a local Lumberjack Contest was difficult to ignore. Even PPE that was unnecessary would have been appropriate for demonstration purposes.

In this picture, a few items of PPE are in order. Chaps were appropriate for bucking, and more than I had access to back in 1988. Boots, which can not be seen in this picture, were adequate. Stylish sunglasses that are also obscured, were likely rated as sufficient for eye protection. There is no need to tuck the shirt in for bucking logs that are stripped of branches that might snag.

What is lacking? Gloves, even for those who do not wear them at work, would have been proper attire for this contest. A hard hat, which is for protection from falling debris, could potentially deflect a kickbacked saw. Hearing protection might have been unnecessary with the fancy and remarkably efficient muffler on this saw; but I actually do not know, (and I saw no earplugs). 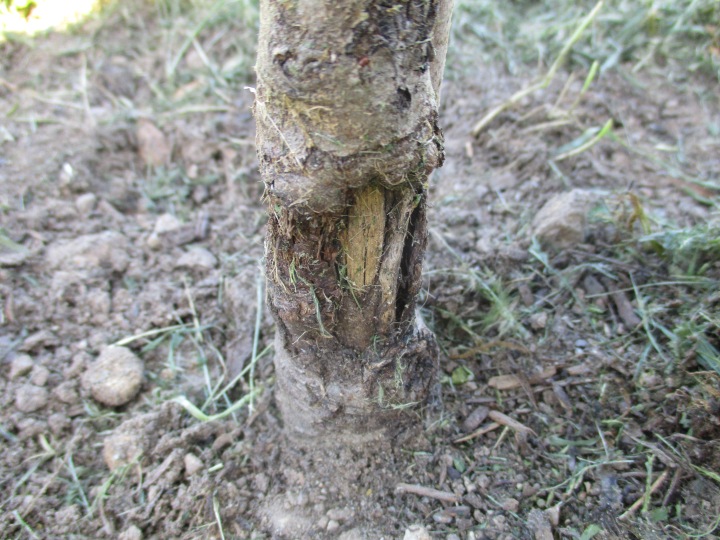 The most destructive tools that so-called ‘gardeners’ have access to are hedge shears. They use them on just about anything within their reach. If a tree is not beyond their reach, they are likely to shear it into a nondescript glob of a shrub, complete with lodgepole stakes and straps that never get removed. Yet, in all their enthusiasm, they will not properly shear hedges that are actually intended to be shorn. Well, I have ranted on that enough.
The second most destructive tools that so-called ‘gardeners’ have access to are weed eaters, which are also known as weed whackers or edgers. Although not actually related to real edgers, they are known as such just because they are so commonly used for the same purpose. Weed eaters are designed to cut weeds indiscriminately, and are quite efficient at doing so. The problem is that they cut or try to cut anything else they encounter.
So-called ‘gardeners’ often gouge the paint off of the bottoms of walls and fences, just because it is easier to cut the weeds there with a weed eater than it is to pull them. What is worse is that they also often cut off the tops of perennials that are trying to regenerate in spring after winter dormancy. Spring or summer bulbs might never get a chance to bloom. Perennials, groundcover plants and shrubbery are not safe from the blatant indiscretion.
The sad little Memorial Tree in Felton Covered Bridge Park gets gouged more than annually by a weed eater. Every time it happens, I am assured that it will not happen again; but if the weeds get cut before I pull them from around the trunk, it does . . . very regularly. I was also assured that the tree would be outfitted with a tree-guard, but as you can see, it has not yet happened. I am told that I can not put my own guard on the trunk.
Those causing this damage are non-horticulturally oriented people who are assigned community service for some sort of infraction, so should not really be expected to know how to use weed eaters properly; not that this is any consolation for the damage. What is worse is that such damage is so commonly caused by so-called ‘gardeners’ who really should know better, and charge good money to take care of the trees they damage and kill
The most recent article about the Memorial Tree, with a link to a previous article that links to previous articles . . . and so on, can be found at: https://tonytomeo.com/2018/10/14/memorial-memorial/