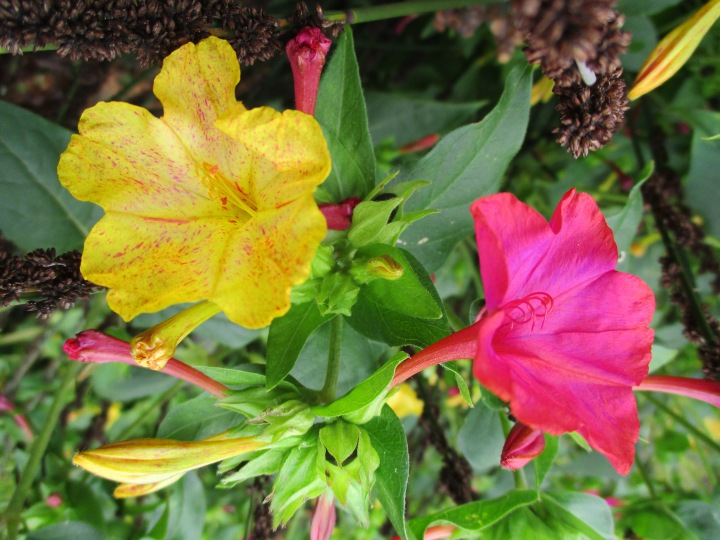 If the flower on the left is a four o’clock, is the flower on the right a five o’clock, or perhaps a three o’clock? Is one a.m. and the other p.m.? What about the flower of the same species that I featured twelve hours ago? What about those in another picture that I will share next Saturday?
Of course, only the colors are different; not the name . . . or the time.
What is odd about these two seemingly different flowers is that they are on the same plant. In fact, they are on the same stem, separated only by a few inches.
Four o’clocks can be odd that way. Individual plants typically bloom with exclusively pink, red, white, yellow or orange flowers. The shades and hues of these colors are variable, but are typically homogeneous throughout each entire plant.
Some plants bloom with flowers of one color that are spotted or variably striped with another. Their flowers are not as homogeneous as those that bloom with only one color, so some of their flowers might be uniformly one color or the other, without spots or stripes. Some plants bloom with a few different colors!
Distinctly bright pink (but not light pink) flowers seem to be the most fragrant and the least variable, typically devoid of spotting or striping. They may be more closely related to the wild species, as it would have been found in its natural range in the Andes, prior to breeding for more interesting colors. Perhaps, after enough generations, other four o’clocks would eventually revert to the same characteristically fragrant bright pink flowers, just like many varieties of nasturtium eventually revert to standard bright orange and yellow. It is hard to say now, while naturalized four o’clocks have yet to do so.