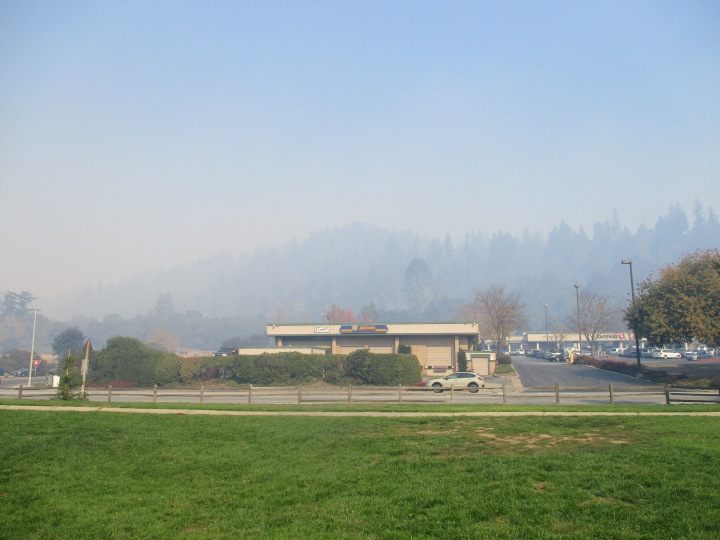 What a surprise. There was none when I went in to use the computer as the sun came up into a clear blue sky this morning. When I came outside just a few hours later, it was everywhere. It was so thick and so aromatic that it was obviously very close, but it did not smell like it was in the ponderosa pines around Scott’s Valley where I happened to be at the time. Once I got on the road back to Felton, I could see that besides the monochromatic ambient smoke that obscured the surrounding hills, a prominent and much thicker brown cloud of smoke hovered low over the San Lorenzo Valley. The smoke was even thicker in Felton, and obscures the range to the west where Bonny Doon is. As I write this in Felton Covered Bridge Park, ash is falling onto the computer screen.
The fire has apparently been burning since last night in the Pogonip, closer to Santa Cruz, and is now contained. Paradise Park has been evacuated. Highway 9 is closed between here and there. Sirens announce the arrivals and departures of firetrucks as they migrate into town from the south on Highway 9, and back south toward Santa Cruz on Graham Hill Road and Mount Hermon Road, as if even they can not get through on Highway 9. Heavy helicopters can be heard but not seen off to the south. A cumbersome airplane is circling the area.
There is not much of a breeze. It seems as if it has not gotten as warm as predicted for today. The smoke and sirens sets the mood. It is not good, even though we know that the fire is contained.
Fire is part of life here. Clear cut harvesting of redwood more than a century ago allowed more combustible specie to proliferate over the area and among the redwoods as they recover and regenerate. The forest is now more combustible than it has ever been, but can not be allowed to burn with so many of us living here. Without burning, it becomes more combustible.