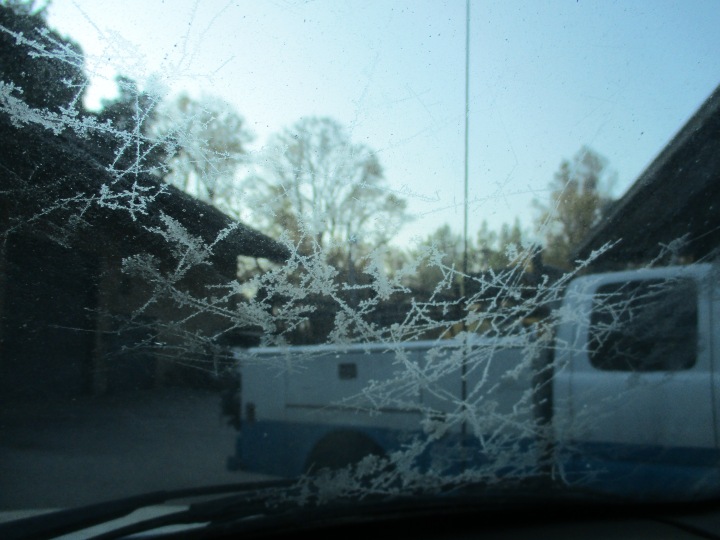 We do not get much frost here. This picture of the view through the windshield of one of the work vehicles was taken more than a week ago, while the humidity and the temperatures were still quite low. The sparse and angular pattern of the frost on the windshield is a result of the minimal humidity. There will be more frost later in winter, although there will not be nearly as much as most other climates get.
After a cool Monday morning last week, the weather got a bit warmer, or really just less cool. Rain started about midnight between Tuesday and Wednesday, and continued through the day and into the night. More rain is predicted to start after noon next Tuesday, and continue through Thursday. There will be no frost during this weather pattern. Frost happens here only between rainy weather. One might think that since we do not get much rain, there would be plenty of time in between for frost. Really though, much of our winter weather is simply quite pleasant, neither rainy nor frosty.
As appealing as this might be to those in harsher climates, it has certain disadvantages.
So far, there was just enough chill to start defoliation of the black locusts and box elders in the background of the picture, and just enough rain to almost finish it. Trees that need more of a chill to start this process are not so impressed with the weather. Many of the crape myrtles have not even started to color yet. Cottonwoods are starting to defoliate, but are doing so while still only dingy greenish yellow because they did not get enough chill for better color.
Spring bulbs that got planted earlier or are being planted about now will bloom next spring because they were so optimal and primed to do so before they were planted. However, many will not get enough chill in their second winter to bloom again. Consequently, many of the bulbs that would be perennial in other climates are grown as expensive annuals here. Likewise, seed of certain specie that self sow may not get enough chill through winter to germinate next spring.
So again, what is comfortable for us is not so ideal for everything in the garden.