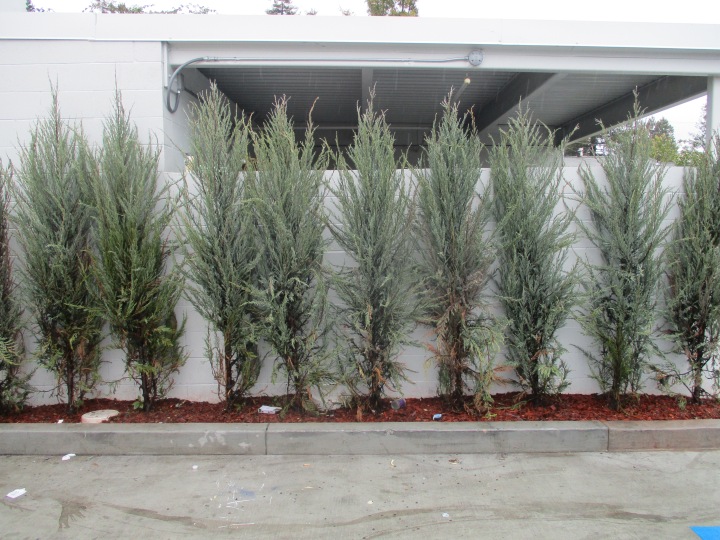 Back when horticulture was still respected, a very long time ago, dense shrubbery with finely textured foliage, such as Japanese boxwood, could be purchased already shorn into cubes that only needed to be installed in a closely set row to become an ‘instant hedge’. For some small hedges composed of small plants that recovered efficiently from transplant, it actually worked reasonably well, even if they did not look so great at first. It also worked for a few larger shrubs that happened to transplant very easily, such as glossy privet. Tall arborvitaes happen to work exceptionally well as instant hedges, although the best spacing for them leaves temporary gaps in between.
However, most of the best of the bigger shrubbery should not be planted as instant hedges. The taller specie of Pittosporum get too distressed from transplants when mature, so should instead be planted while small, and allowed to grow into a hedge. Larger and much more expensive shrubs, take a few years to recover from transplant, and some recover much slower than others, compromising the conformity of the hedge as it develops.
That being said, I am not certain what to say about this instant hedge. The individual plants are much too close to each other, probably because someone wanted instant coverage, but perhaps because the so-called ‘gardener’ could charge more for installing more plants. I seriously doubt that the so-called ‘gardener’ will be able to contain these junipers, which will want to get much taller and wider than their confined space will allow. Even if the hedge bulks out just a slight bit beyond the curb, it will shade out the lower foliage more than it already is. I actually expect the junipers to grow well out into the driveway within only a few years, as they compete for space. If they get big enough, they can break the curb and asphalt pavement. It annoys me mostly because I like Skyrocket juniper so much, that I hate to see it abused like this.
Yet, It could work. As unlikely as it seems, there is a very slight possibility that the so-called ‘gardeners’ may be more qualified than I give them credit for. (Or they might be replaces with such. This is after all, the backside of the same landscape that is inhabited by the crepe myrtle featured last Wednesday.) After all, someone seemed to have enough sense to select #5 (5 gallon) plants instead of #15 (15 gallon) plants that would not be doing so well now. If the top of the hedge is kept down to prevent the junipers from growing as trees, and the facade of the hedge is kept contained to within about a foot and half of the wall behind it, lower growth will regenerate and get enough sunlight to not get shaded out. It will take serious commitment, and a specialized combination of regular shearing and selective pruning to limit congestion, but this hedge just might work.