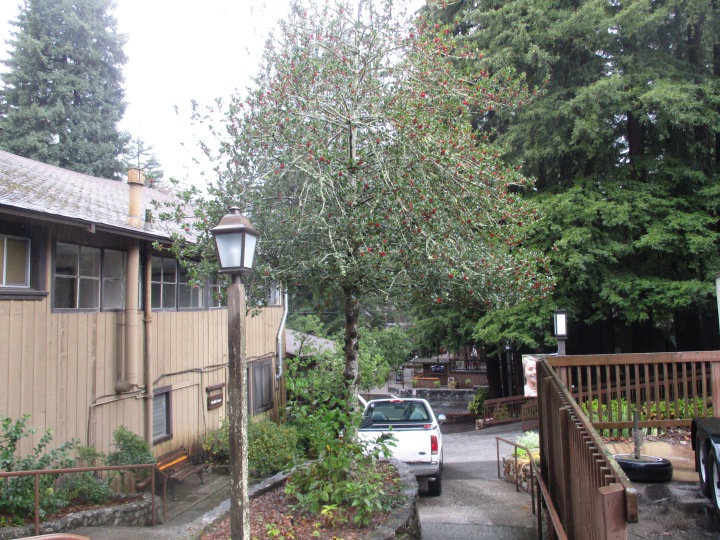 English holly is politely naturalized here. This means that, although naturalized, it is not aggressively invasive, and does not seem to be too detrimental to the ecosystem. It is only annoying to see out in forests, far from the landscapes that the seed escaped from, and wonder if it has potential to significantly compete with native vegetation. It would be better if it were not there.

At least it is pretty. In refined landscapes, it happens to be one of my favorites for distinctively glossy and prickly foliage. There is nothing else like it. Variegated cultivars are just as striking, with a bit of color for situations where there is already plenty of rich dark green. Female plants produce a few bright red berries. Older or distressed plants might produce more than others.

So, I have mixed feelings about this overgrown English holly tree that I must eventually cut down. In the picture above, it is evident that it is not the prettiest. It is a sparsely foliated thicket of tangled inner stems on an uninterestingly straight and bare trunk. It occupies a prominent position where there should be something of a friendlier disposition. It doesn’t contribute much.

However, it does produce an abundance of delightfully bright red berries. I got these pictures while collecting berries to decorate the buffets and tables of the big dining room across the road.

If it were in my garden, I would probably pollard it back to the bare trunk or perhaps just a short stump, and allow it to regenerate with fresh new foliage. Such a procedure would eliminate the tangled thicket of bare interior stems, but would unfortunately inhibit berry production for at least a few years while new growth matures. I just do not want to give up on it completely. 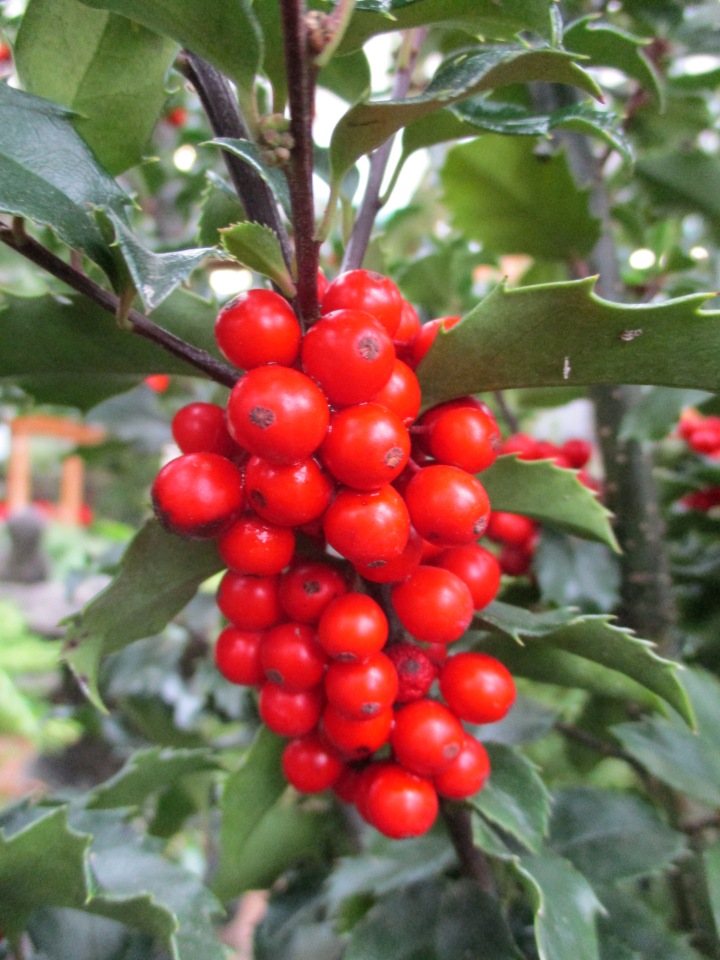 We all know that holly is famous for holly berries, but in modern gardening, English holly, Ilex aquifolium, is appreciated, or despised, for its distinctively glossy but very prickly evergreen foliage. Like countless tiny thorns, the foliage is too prickly to handle for those who despise it. Those who appreciate it know there is no substitute for the elegantly polished sheen and handsome texture.

The lack of berries is due to a lack of pollinators. Most plants are female, so are capable of making berries. However, until recently, male plants were not even available in nurseries. Old formal hedges of female plants were typically accompanied by a few male plants in less refined parts of the same garden. Some newer hollies are grown with two plants of both genders in the same pot.

Plants compensate for their immobility by procuring the services of animals and insects. They bloom with flowers that attract pollinators with colors, fragrances and flavors. Their fruits use similar techniques to attract those who consume the fruits to disperse the seeds within. It is a pretty ingenious system. The animals and insects probably think that they are taking advantage of the plants.

Firethorn, toyon, cotoneaster, English hawthorn and the hollies all produce profusions of small bright red berries that are designed literally for the birds. They are just the right size for birds to eat them whole. If they were smaller, birds might prefer other fruits. If they were any bigger, birds might eat them in pieces, and drop the seeds. The bright red color is a blatant advertisement to birds.

Firethorn is probably the most prolific with its berries. It might also be the most popular with the birds. If the colorful berries are not gone yet, they will be soon. Toyon berries seem to last longer, perhaps because they do not all ripen at the same rate. Because it gets big and takes some work to contain. toyon is more common in unrefined landscapes and in the wild than home gardens.

Holly is not related to firethorn, toyon, cotoneaster or English hawthorn, which are all in the Rosaceae family, although the bright red berries suggest that it should be. Because most holly plants are females that lack a nearby male pollinator, berries can be scarce. Some plants in nurseries are actually two plants together in the same pot, one male and one female, to ensure adequate pollination and berry production. Deciduous hollies are unfortunately rare.