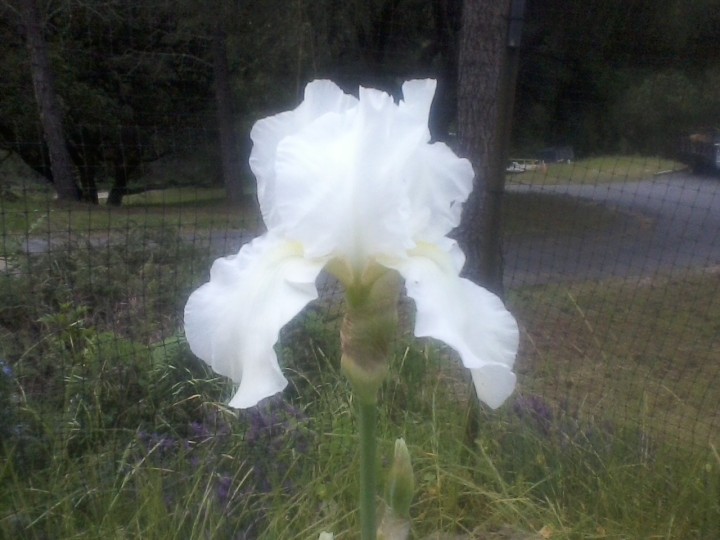 The statute of limitations allows me to discuss this now. It happened thirty years ago, in the spring of 1987. The famous landscape designer, Brent Green, was my roommate in the dorms at Cal Poly, San Luis Obispo. As the bearded iris started to bloom, Brent immediately noticed a bed of uniformly pink bearded iris off the edge of a lawn in the inner campus. He watched it bloom from beginning to end, and occasionally updated me on the progress. During the process, he convinced me that these iris were very rare. Neither of us had ever seen pink bearded iris before. We had no idea that they could easily be purchased from mail order catalogs or nurseries.

Late one warm spring night, Brent telephoned me from a landscape design lab where he had been working late. Back then, we answered a telephone when it rang. Before I could wake up enough to think about what I was doing, or just say “No.”, Brent convinced me to bring something that he needed from our room to the lab. Without thinking, I got dressed, grabbed his designated duffel bag and got on my way. I was sort of concerned that the duffel bag seemed to be empty. I figured that whatever was in it was very lightweight.

By the time I got to lab, Brent was in the lobby, and his associates were leaving. Brent did not seem to be interested in whatever was in the bag. He just thanked me for bringing it as we waked out as if to go back to the dorms. I was puzzled. As we walked, Brent explained that he only needed the bag, and confirmed that it really was as empty as I suspected. I was even more puzzled. I asked why he woke me up in the middle of the night to deliver an empty bag across campus. Well, in the few minutes it took for us to get this far into the conversation, we had arrived at the bed of pink iris. You can imagine what happened next.

Yes. Brent dropped the bag on the ground and began to stuff it full of all the bloomed-out iris rhizomes he could grab! Suddenly, I was very awake, and protested. He explained that now that the iris had finished blooming, they would be dug up and disposed of. What else could I do? I knew he was correct. I did not want to waste the iris. I also realized that panic would only draw attention, and that delaying the process would only increase the likelihood of getting busted. I pulled up as many rhizomes as I could hastily grab as well, and stuffed the bag until it was full. Brent was feeling rather satisfied as we walked back to the dorms. I was mortified.

The rhizomes got split and groomed, and eventually went into our mothers’ gardens. We each got about half. The following late winter and early spring, Brent would check in on his when he would go south for the weekend. I would check on mine when I would go north. They grew well, and fattened up to bloom. The stalks came up. The buds swelled. Then, finally, and with much anticipation, they bloomed! They were magnificent! They were glorious! They were spectacular! They were purple and yellow! WHAT?!?! Where was the pink? What happened? This is NOT FAIR! Wait a minute, . . . Could it be karma?

Thirty years later, we still grow these two bearded iris. They are known simply as ‘Karma Purple’ and ‘Karma Yellow’. We do not know their real names. A few years ago, they were joined by a nice tall ‘Karma White’, which was supposed to be a rusty red that I ‘borrowed’ from a neighbor. Neither Brent nor I have ever grown a pink iris.

5 thoughts on “The Colors Of Karma”