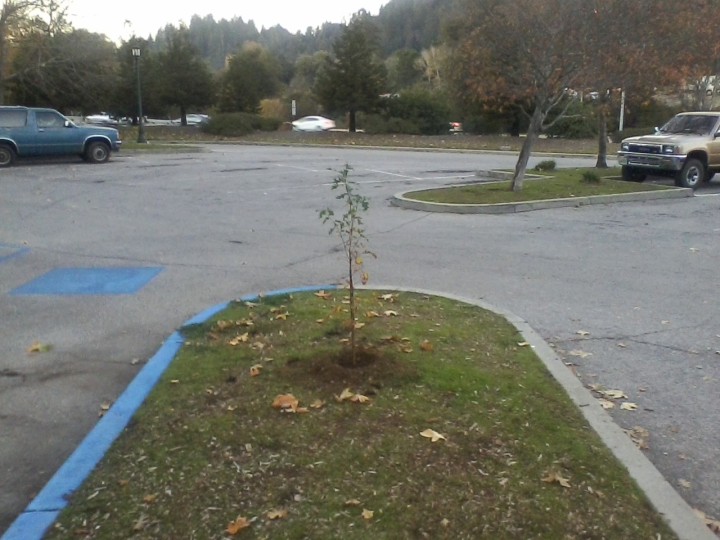 How did the Featherstone Tree survive? (See: https://tonytomeo.wordpress.com/2017/10/05/big-tree-in-a-small-town/.) It was planted on the edge of a busy highway where heavy loads of lumber were driven by oxen, at a time when society was more interested in harvesting trees than preserving them. Yet, after more than a century, it is still here.

The Scofield Tree is a very small valley oak in an island of a parking lot at Felton Covered Bridge Park, just across the San Lorenzo River from the Featherstone Tree. In a few centuries, it might be comparable to the big valley oak that was recently cut down across the road (See https://tonytomeo.wordpress.com/2017/09/11/goodbye-to-an-old-friend/.) It is a good choice for this location because it develops a remarkably complaisant root system for such a large tree, and it is a native, so does not need to be watered.

However, it is the fourth tree to be planted here. The original California black oak that was planted when volunteers from the Community built the park years ago did not last long before getting run over by a car. It was not replaced until a small Eastern redcedar was planted on New Year’s Day of 2013. That tree was dead and crispy by summer. A bigleaf maple was planted the following winter, and sort of survived through the year, only to die the following winter. It was too late in winter to plant anything new that year, so the tiny valley oak was planted late in 2015.

Although tiny, it had a nice root system, which was more than the two bare-root trees before it had. The hope was that if it could survive getting peed on by dogs long enough to disperse roots, it would be fine. It started to foliate the following spring, only to get much of the bark gouged away by a ‘gardener’ with a weed whacker. The poor tree nearly died, but somehow survived and started to recover. However, it did not recover fast enough to get ahead of the dog pee. It really seemed to be struggling through this year, and is now getting ready to defoliate for autumn. It really needs to get some height next year. Small trees are just too vulnerable to all that goes on in a park.

Each of the redwood trees around the perimeter of Felton Covered Bridge Park is a memorial tree, sponsored by friends or family of the deceased. An additional sweetgum tree is a memorial tree for a French bulldog. Some of the trees are outfitted with memorial plaques. The tiny valley is named the Scofield Tree for an old friend of the Community, Jeff Scofield, who passed away in the spring after the tree was planted; but it is really a memorial tree for a few people who passed away within a few years of that time. The Scofield Tree was sponsored and planted for the deceased by Felton League, an informal group of displaced and socially disadvantaged people of Felton, and their friends. Their Facebook page can be found at https://www.facebook.com/Felton-League-520645548069493/.

Perhaps what is written now about the Scofield Tree will eventually become part of the history of Felton, and be summarized on a plaque like the one on the Featherstone Tree. It would be excellent enough if the Scofield Tree simply does what good treed do in a park for a few more centuries.

3 thoughts on “Small Tree In A Big Park”