Palm trees did not impress me much when I was young. Although striking in the right landscapes, they did not ‘do’ much. They made no fruit. They made no firewood. Only the big Canary Island date palms made any significant shade. What they did make was a big mess that was difficult to rake. They were expensive to maintain. They sheltered rats and pigeons. Their seedlings came up in the weirdest places.

Back then, the only two palms that I was really familiar with were the Canary Island date palm and the Mexican fan palm. Windmill palms were common too, but because they are so much less obtrusive, they did not get my attention. Queen palms had not yet become a fad, so were mostly in older neighborhoods outside of my world. I was aware that there was an odd type of Mexican fan palm, but never gave it much thought.

Then I went to college . . . and met Brent, from Southern California, where palms are more appreciated. I also met more palms that I had either ignored earlier, or had never seen before. After a while, Brent showed me around coastal Southern California, including the Pacific Coast Highway and Santa Monica, where I saw palm trees at their best.

I will never forget turning onto Bedford Drive in Beverly Hills, where the Beverly Hillbillies drove when they came to town. I had never seen Canary Island date palms and Mexican fan palms like that before. They were so majestic! They were so tall! They were so uniform! It did not change what I already knew about palms, but it did give me a different respect for them.

That odd Mexican fan palm that I mentioned earlier was actually the California fan palm, or the desert fan palm, which is classified as a distinct specie. It gets about half as tall, but twice as stout, with fluffier foliage. Because it is shorter and stouter, it stands straight, without bending like the taller and lankier Mexican fan palm does. It is also more genetically variable because it naturally grows in isolated oases rather than a contiguous range.

After seeing the California fan palm growing wild outside of Palm Springs, around the springs that Palm Springs is named for, it became my favorite palm. It is very stately in the right situations. It lines North First Street at Saint James Park in San Jose, and flanks the Palm Driveway at the Winchester House. Unfortunately, it really prefers to be out in the aridity and warmth of the desert. It looks rather sickly if it gets too much water.

While cruising around the Los Angeles area, Brent pointed out a few ‘bastards’, which are hybrids of California fan palm and Mexican fan palm. Apparently, they are not distinct specie, but rather subspecie. In other words, they hybridize freely. Each parent has attributes; and the bastards get the best of both.

Mexican fan palms, whether I like them or not, are very tall, elegant and graceful. They are exquisite skyline trees, with leaning or bowing trunks that can move casually in the wind. California fan palms are stout, stately and formal. If not watered too much, their straight and uniform trunks, and canopies of fluffy foliage, work nicely where conformity is desired. Bastards have trunks that are just thin enough to be elegant, but just stout and straight enough to be stately. Their canopies are more ‘lush’ than fluffy like those of the California fan palm.

Until recently, bastards were solitary trees that grew randomly from seed. They were not available in nurseries. If they had been, they would have been very variable because of their random breeding. However, someone took notice enough to cultivate what seems to be a cultivar known as Washingtonia X filibusta. (Washingtonia X filibusta is derived from the names of California fan palm, Washingtonia filifera, and Mexican fan palm, Washingtonia robusta. The ‘X’ designates it as a hybrid.) They are becoming the new alternative to the formerly all too common Mexican fan palm. 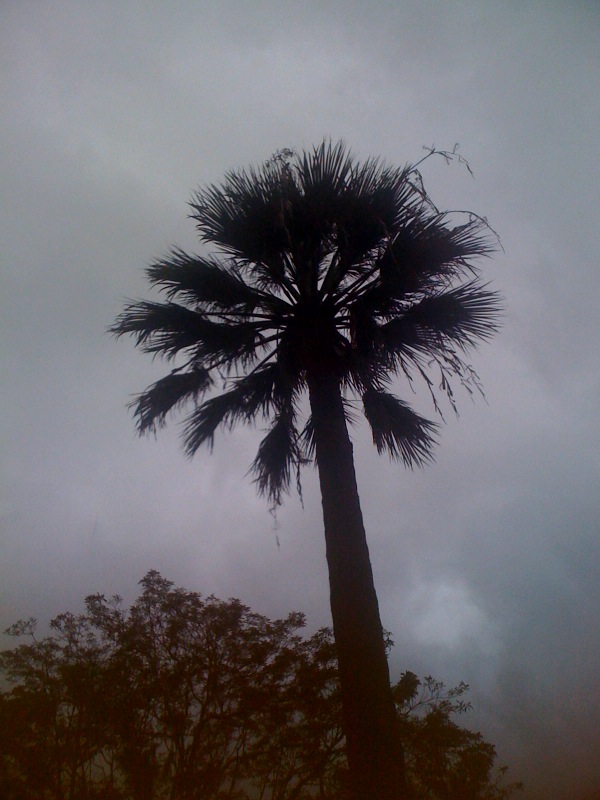