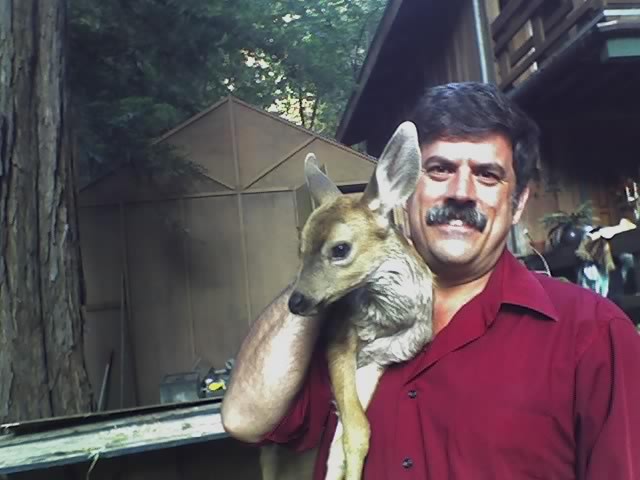 Tim Buck II, pronounced like ‘Timbuktu’ in Mali, but known simply as ‘Timmy’, came to live with us while he was just a baby fawn. Mr. Tim Buck Senior left Mrs. Buck to raise little Timmy alone as a single mother. Mrs. Buck then vanished, leaving little Timmy enfeebled on the side of Highway 9 south of town. No one knows what happened to Mrs. Buck. She might have been hit and killed by a car. She might have been eaten by a Mountain Lion. Somehow, she was not there to raise little Timmy.

Traffic was stopped on Highway 9 as little Timmy staggered about, either anemic, or starving from the absence of Mrs. Buck. He could barely walk, and certainly could not bound up or down the steep hillsides to leave the Highway. Most of us who stopped knew that he would not survive, and just accepted it as part of nature. However, we could not just leave him there with a few concerned children also stopped in the traffic with us. I loaded him into the back seat of the pick up and took him with me so that the children would think that he would be taken care of. I expected him to be deceased by the time I got home.

Instead, like a scene straight out of ‘Tommy Boy’, Timmy survived. He got up and was looking at me in the rear view mirror. Now what? Barbecue? I took him home to ask the neighbors.

That was too much help. They gave Timmy goat milk and groomed him of ticks, and a within a few hours, Timmy was bounding about the yard and playing with Bill the terrier, and Melly and Chewy the two cats. By nightfall, the entire herd wanted to sleep in my bed!

Timmy grew very fast and consumed quite a bit of goat milk. He craved more than milk though, and started eating my roses. (This was later in spring.) When I yelled at him to stop, he just looked at me quizzically, and continued eating. The roses did not last long. Timmy then ate the leaves off the fruit trees. Then he ate some ornamental grasses. There was not much that Timmy would not eat. When I tried chasing him off to eat in the forest, he just came right back to play with his friends and eat more of the garden. When I kept the door closed, he just came in the cat door and found his way to my bed. When I took him across the creek and down the road a bit, he just followed me back.

The funny thing is that everyone liked Timmy! He was so nice and polite, even as he destroyed the garden. That was a very bad year for gardening!

By the following spring, Timmy was spending almost all of his time out in the forest. He had depleted everything in the garden, so needed to go farther out to find vegetation within reach. He had grown very fast into a tall and lanky young buck. I slowly resumed gardening in early summer, with only minimal nibbling.

I sometimes wonder how Timmy is doing. I am pleased that he is no longer in my garden. I can enjoy growing roses again. The only thing I enjoy finding in the rose garden more than a nice healthy rose is a bitten off stub where there was about to be a rose.

54 thoughts on “Timmy in the Garden”