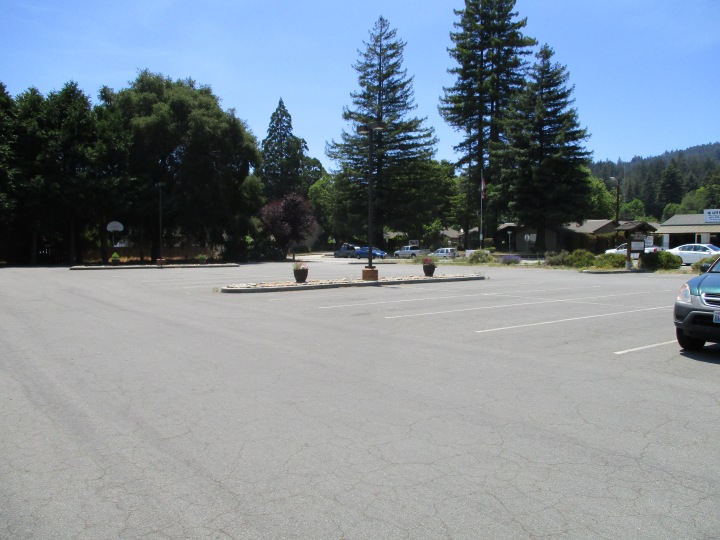 What are they doing out there, in those two pots in the island of such a vast parking lot? It is hard to say from this distance. They are so isolated. They might be happy and healthy summer blooming annuals. They might just be weeds. They could be plotting World domination. Plants can do some weird things in isolation.

Mexican fan palm is the most familiar palm in Los Angeles. Some know them as skydusters because they are so tall and lanky, and do not seem to have anything better to do than lazily brush against the undersides of clouds as they float by. In Los Angeles, there are not many clouds to keep them busy, and there is not even much smog anymore. Mexican fan palms certainly do not make much shade, and because they are so tall, their little shadows land in neighbors’ yards. They are so tall that you might be able to see them from wherever you are merely by looking towards Los Angeles. Instead of getting Frisbees and kites stuck in their canopies, they collect satellites. When they drop one of their big leaves, it burns up in the atmosphere.

In their natural environment, Mexican fan palm lives in a large and mostly contiguous native range (areas) in which individual colonies are not isolated for too long. Pollen gets shared rather thoroughly. Trees are consequently very similar throughout the range. Slight genetic variation is only perceptible in regions such as Los Angeles, where various groups of trees are grown from seed collected from various regions of the native range.

Sometime in the ancient history of the specie, a few individuals decided to leave the rest of the herd and go live in isolation out in the adjacent deserts. They could only survive where there was a bit of water, so they inhabited any oasis they could find. This might have happened as some trees migrated up canyons that had perennial creeks flowing through them only to have the lower portion of the canyon go dry as outflow from above decreased. Seismic activity within the region has a way of altering the outflow of springs. Anyway, these more reclusive palms eventually became a separate species, or subspecies, or variety, depending on the botanist providing the information. This separate species (or subspecies or variety) is now known as the California fan palm, or the desert fan palm. It thrives on the hot and arid desert air, but is not very happy in milder and more humid coastal climates. (I am sorry that I do not have a good picture at the moment.)

Unlike Mexican fan palm that lives in a big contiguous range, California fan palms lives in small isolated colonies where they can not share their pollen freely with other colonies. Over thousands of years, each colony adapts to its specific environmental conditions. Genetic variation within colonies is not perceptible, but is quite obvious in landscape situations where trees grown from seed from different colonies can be compared.

California fan palm is much shorter and stouter than Mexican fan palm. It does not need to compete with too many other specie out in the desert. The trunks are straighter, and the canopies are fluffier. Unlike the very informal and relaxed Mexican fan palm, it is an excellent palm for formal landscapes. It is the specie that flanks the famous Palm Driveway at the Winchester House in San Jose. The only stipulation for these formal installations is that all the palms must be grown from the same batch of seeds procured from the same colony.