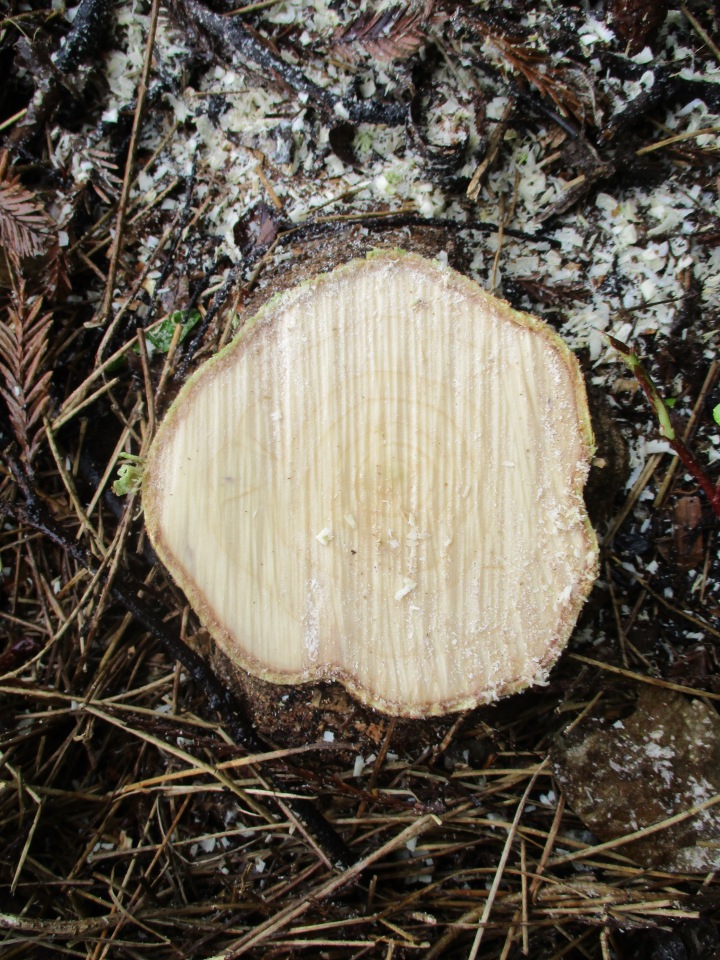 Before I continue, I should mention that I have worked for some of the BEST horticultural professionals in the entire Universe! Seriously! I have worked for the single most excellent nurseryman EVER, and not one, but a FEW of the most excellent arborists EVER! YES, I am bragging! I can write about some of them another time.
I have also worked for some of the worst, including those who were involved with the maintenance of landscapes associated with various residential sites that were in the process of being renovated or demolished and redeveloped at the old Fort Ord. They engaged in more unethical activity at Fort Ord than I can write about in just a few articles. For now, I will just rant about one such incident.
Back in about 2007 or 2008, I was asked to go out to investigated a distressed ‘Marina’ madrone on Abrams Drive. The subject was easy to find because is was the only nearly dead tree within a remarkably uniform row of very healthy ‘Marina’ madrones. It had been too severely ravaged by a severe infestation of aphid to be salvaged. I prescribed removal and replacement with a new specimen of the same cultivar.
I was annoyed that the removal of this single tree would ruin the otherwise perfect uniformity and spacing of the row of trees that had been so well maintained for many years. I was even more annoyed that the people whom I worked with had not noticed that the tree was distressed before it succumbed to the aphid infestation. Aphid is not normally much of a problem for ‘Marina’ madron. It was obvious that the subject had been deteriorating for a few years before it finally succumbed, and would have exhibited very obvious symptoms of distress for at least the previous few months. Someone should have noticed a problem during that time. That is part of what the clients had been paying us significant amounts of money to do.
All that I could do was write my report to recommend removal of the subject so that the client could justify the expense.
The following week, on my way down Abrams Drive to investigate another problem, I noticed that the subject had not yet been removed. However, one of the trees next to it was missing. I stopped to investigate and found a stump with fresh sawdust. I called the project manager, but before I could ask about the missing tree, was informed that the subject had been removed. Well, one can guess what happened. The ‘tree crew’ removed the wrong specimen!
My report was very specific about the location of the subject, and cited the subject’s identification number. Now, even without that information, it should have been EXTREMELY obvious which tree needed to be removed. As I said earlier, I had no problem identifying it as the only nearly dead tree within a very uniform group of very healthy trees. Someone on the crew who removed it, or the project manager who was supposed to ‘manage’ the project, or ANYONE involved with this removal should have noticed that the wrong tree was getting cut down. Even if no one bothered to notice the dead tree that really needed to be cut down, someone . . . ANYONE of the so called ‘horticultural professionals’ should have wondered why such a remarkably healthy tree was being cut down.
So, the ‘tree crew’ returned and cut down the original subject, and actually did so with their second attempt.
Then the two trees needed to be replaced. It sounds simple enough. The problem was that these particular ‘professionals’ knew of only a few trees, and ‘Marina’ madrone was not one of them. They replaced the removed trees with the ubiquitous crape myrtle, which completely ruined the conformity of the otherwise uniform row of ‘Marina’ madrone.
The client was billed for it all.
They payed for the removal and replacement of a tree that they had already payed a significant amount of money for, to be maintained properly so that this sort of thing would not happen.
They payed for the removal and replacement of a tree for no justifiable reason . . . just because NO ONE involved could identify the difference between a healthy tree and a nearly dead tree.
In the end, the client payed a lot of money to get their formerly exemplary trees replaced with the wrong trees.