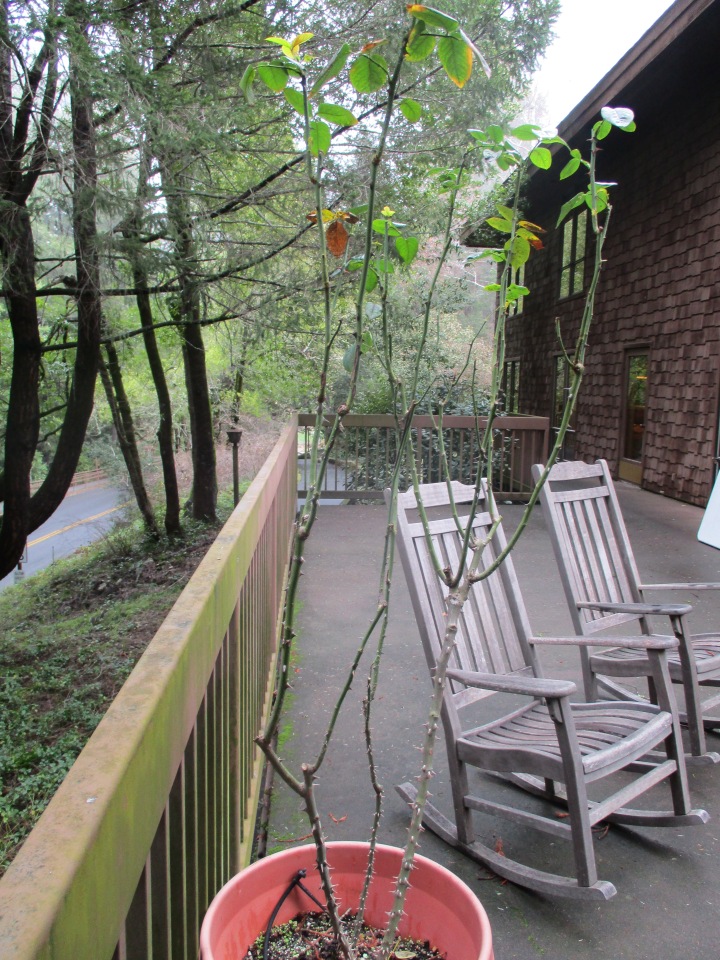 Winter is for pruning. Any good native of the Santa Clara Valley knows that. It starts as soon as the first deciduous fruit trees defoliate and continues to the last minute rush to finish before the buds start to swell at the end of winter. It may seem like there would be no last minute rush now that all the orchards are gone, but there is so much in landscapes to prune that prioritizing and scheduling pruning takes a bit of effort. Just like we know that apples and pears can be pruned slightly later than apricots and prunes, in the landscape, we know that sycamores might be delayed until the birches are done. Naturally, I feel compelled to prune the flowering cherries and fosythias, but am almost content to wait until after they finish blooming in early spring. Of course, I cringe as I write this.
Roses are getting pruned now. I first finished a few scrawny hybrid tea roses, including a few ‘tree roses’. They really should be relocated to a sunnier spot, but not this year. Afterward, I did a row of climbing roses that are not exactly climbing the fence that they were planted against. They really should be moved too, but like the others, not this year. I still need to prune a bank covered with modern carpet roses. I am none too keen on them. Actually, I rather dislike them. However, of all the roses, they are the only ones that happen to be in the right situation, and are doing a nice job.
Just before I started with the first batch of hybrid tea roses, I pruned a single potted hybrid tea rose that is all alone on a deck across the street. I wanted to get it done when I thought about it so that I would not forget about it in the process of pruning everything else. It had bothered me for some time because it was so tall. I mean, I could not reach the top of it. The blooms up there were closer to upstairs windows than to anyone wanting to seem them from ground level. The supporting lower canes were bare of foliage, but well armed with nasty thorns. Honestly, I thought that the deck would have been more inviting without it.
Pruning it was rather simple; just three major cuts. Since the rose is where people mingle, I chopped the thorns just so that they are not so sharp. The remaining three canes were older than one year, but did not seem too terribly old. In fact, there was still a bud to cut back to on one of the canes. For the other two, I had to cut back to old petiole scars, expecting that dormant buds are still in there. That was about it.
The problem that I was not aware of is that the rose was left that tall intentionally because a former gardener liked it that way! Now I feel badly. I really thought that it had just been neglected. Like I mentioned, the canes did not seem to be several years old. They must have replaced older canes in just the last few years. Regardless, I can not put it back. In the partial shade there, it will probably grow back as tall within the year. I hope that the former gardener does not find out about it before then. I know that if someone did that to a roses that I had pruned in a specific manner, I would be really angry about it.