Contrary to popular belief, we do get a bit of wintry weather here. It is neither as cold nor as snowy as weather is in most other regions, but it gets sufficiently cool and rainy to let us know it is winter. In fact, here on the western slopes of the Santa Cruz Mountains, we get the little bit of extra weather that does not quite get over the Summit into the Santa Clara Valley. Clouds must unload slightly in order to gain sufficient altitude.

There have been more storms so far this winter than there normally are, and this last week was particularly stormy. It is both a lot of fun, and a lot of work. Storms are innately wet, as well as messy. By the time we catch up from one storm, another arrives. The first few storms are something to be celebrated. The last few start to be rather bothersome.

1. Do you see the well kept shop buildings on the left and right? Neither do I. This is what I found when I got to work on Thursday morning after the electricity was put out by a wicked storm. The lights in the middle are those of a car out on the road. I managed to set up the coffee ‘machine’ to make coffee for the crew when the electricity came back on. I also put the leftover coffee that someone made late the previous night into a pitcher, so that if the electricity did not come back on in time for the crew to make fresh coffee, the first few to arrive could warm up the leftover coffee in the . . . . . . microwave. Okay, perhaps that was not such a good idea. The coffee was just swell cold. 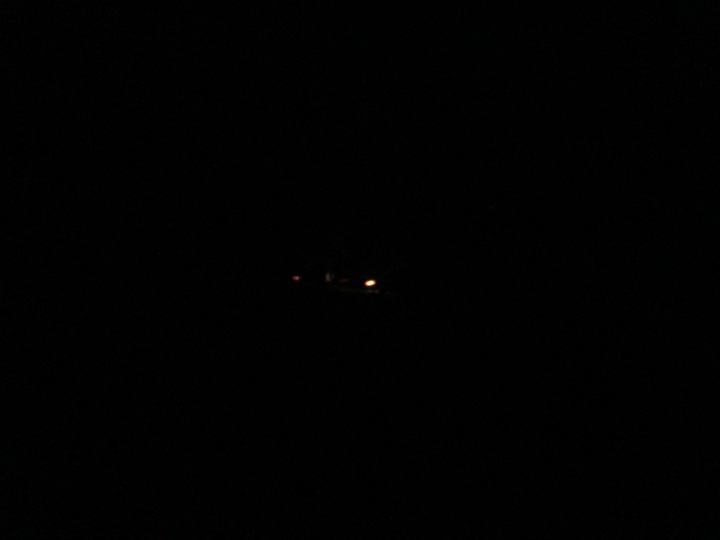 2. Many trees fell during the last few storms. Many more trees lost significant limbs. This unfortunate coast live oak is not as bad as it looks. Once the stub of the fractured limb is removed, it should be just fine. We try to identify potentially hazardous trees, and either work with them to make them less hazardous, or remove them completely. It is nonetheless impossible to predict all hazards. I would have not considered this particular subject to be hazardous prior to the damage seen here. 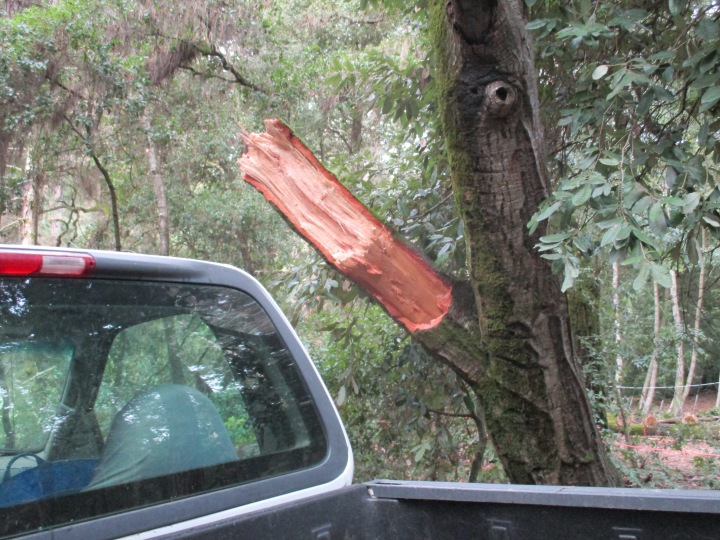 3. Artificial poinsettias were removed about a month after Christmas. https://tonytomeo.com/2019/01/26/pseudodendron-falsifolia/ They are no longer seasonal. Besides, this is the stormy season here, when these artificial poinsettias would be likely to get blown about the neighborhood if left out. If they were to survive the storms, they would fade in sunnier weather of spring. But hey; why must I justify their removal? They are tacky! They will stay hanging in the barn until after next Thanksgiving.

4. Pruning scraps from zonal geraniums that needed to be pruned back earlier in winter were just too tempting. Rather than discard them, I processed them into cuttings. I tried to give most of them away, but ultimately needed to plug some back into the landscape. They get plugged this time of year so that they get soaked by the rain as they disperse roots. Many went into situations where they will be without automated irrigation. If planted too late, they would just desiccate when the rain stops. These are in a neat row along the base of a stone wall separating a few roses from the roadway, so they will get a bit of water from the roses. So far, they ALL are doing well. Propagation can be such a bad habit. 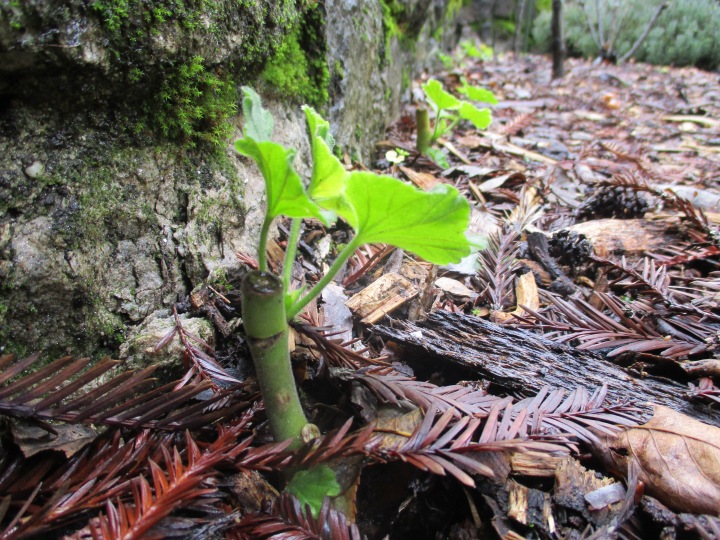 5. This was NOT my idea. I am none too keen on Japanese maples. Yet, this one works very nicely for the particular landscape it is in. I am impressed by the vibrant red color because this particular tree is somewhat sheltered and partly shaded. (Exposure to sunlight and cool wintry weather enhances color.) It looks great among the redwoods. 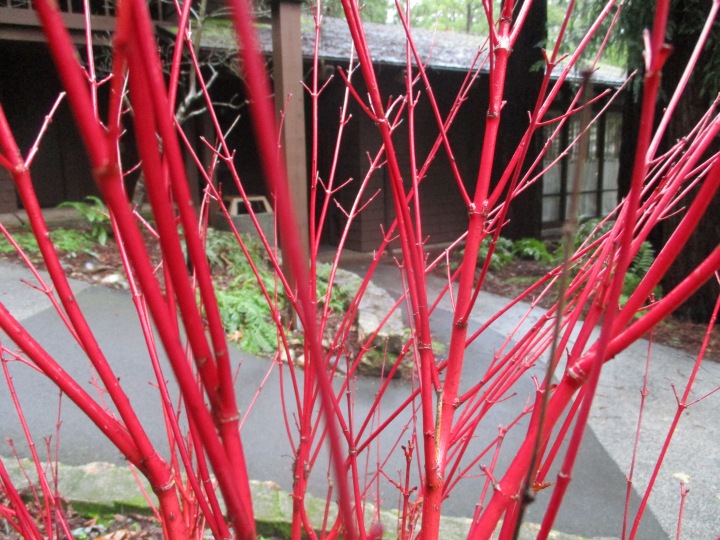 6. No, I do NOT grow ANY of the snowdrops, Galanthus nivalis, or any of the hybrids. ‘Snowflakes’, Leucojum vernum, are only here because they naturalized on the riverbank, likely from seed or bulbs that washed in from a garden upriver. They are spreading quite nicely, and are pleased to bloom in this unirrigated spot after soaked by a few storms. I could have gotten a picture with more flowers in it, but most are already deteriorating. I got these as a closeup instead. I know they are not really snowdrops, but I can brag about them anyway. 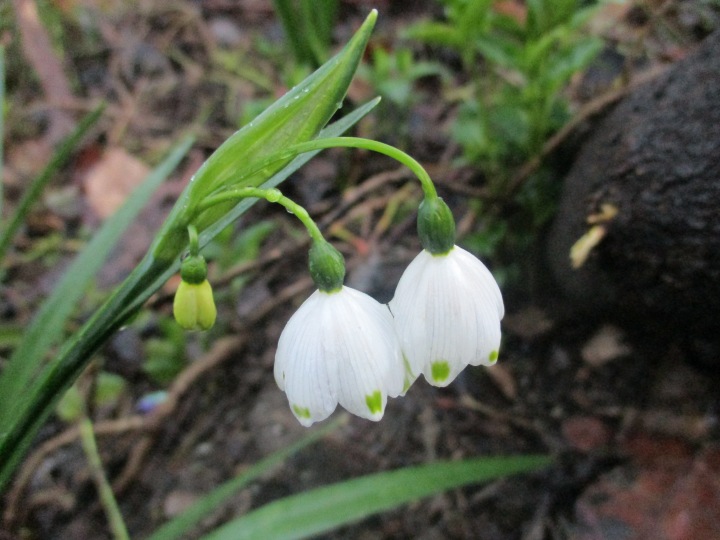 18 thoughts on “Six on Saturday: After The Storm”