B & B, formally known as ‘balled and burlapped’ nursery stock, was expected to be the next big ‘thing’ in nursery commodities here in California back in the late 1980s. As those outside of California know, it is field grown plant material that gets dug and marketed with its roots wrapped in burlap. It was more common in other regions, so was expected to become more common here as more nursery stock was to be imported from Oregon.
However, growers in Oregon started growing more of their stock in cans like we do in California, and then did not send as much of their B & B stock to California as predicted. Only certain slow growing commodities and large items are still field grown, and then dug and ‘balled and burlapped’ for export. Of these, arborvitaes, rhododendrons and various deciduous shade trees are the more commonly available locally.
B & B stock from Oregon is typically of exceptional quality. Horticulture is taken more seriously there.
Because B & B is still a foreign concept in California, it is typically canned to be more familiar to local consumers. It does not take long for it to root into the little bit of extra potting medium and fill out the cans. There is no need for the roots to be unwrapped, since the burlap decays as fast as the root disperse and expand. The now canned but formerly B & B arborvitaes in the picture above are exemplary.
Yet, they are not perfect. The problem with B & B stock here is that there are not many horticultural professionals here who know how to work with it, or even care to do so properly.
The picture below shows how shallow the B & B root systems of the arborvitaes are relative to the squat #15 (15 gallon) cans that they were purchased in. They obviously did not get enough time to root into their potting medium after they were canned. This is not due to a lack of horticultural expertise. This is either (and hopefully) a mistake in scheduling, or merely a lack of concern. But hey, no bother. They are still excellent specimens. 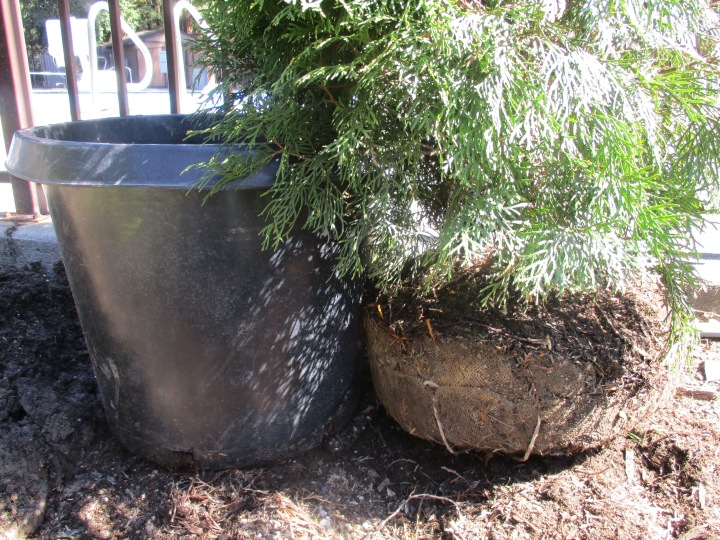 At least they seemed to be. A potentially serious problem was revealed when they were installed and the loose potting medium fell away from the burlap.
Many years ago, the burlap containing the balled root systems of B & B stock was bound with biodegradable jute twine. It rotted away before it could do any damage. Since then, nylon twine became more commonly used. Those who are familiar with B & B know to simply cut and remove the nylon twine before planting.
Whomever processed and canned these arborvitaes are either (and hopefully) not familiar with B & B, or just do not care. The nylon twine was still tightly bound and tied. If these arborvitaes had rooted into their potting medium and held it intact, this twine would not have been visible. Because it is wrapped a few times around the main trunks as well as wadded up burlap, it could have girdled the main trunks as they grew and expanded!
In a way, it was fortuitous that the potting medium fell away to expose the nylon twine, which was cut to allow for expansion of the main trunks. These exemplary B & B arborvitaes from Oregon should live happily ever after.