Subjects for more than just a few of my illustrations are found in the simple landscape of Felton Presbyterian Church. Until the last year or so, I had been able to participate in more of the seasonal work days, when we do most of the maintenance of the landscape, as well as a few other chores. No one seems to mind that I am Catholic.

The biggest and best trees, including the big coast live oak, Quercus agrifolia, out front (which I should have gotten a picture of) are native, and were there before the site was developed. Smaller trees of the same species have appeared since then. Also, a nice big catalpa, Catalpa speciosa, appeared right out front, just to the south of the big coast live oak. Otherwise, most of the landscape is an odd mix of what various parishioners contribute to it.

1. Naked lady, Amaryllis belladonna, bloomed late last summer, just before the foliage started to develop in autumn. They are blooming again! Now I know where fake roses come from.

2. Breath of Heaven, Coleonema pulchrum, has a name that is more appropriate to a Church than ‘naked lady’. The flowers are tiny, and not very impressive, but are pretty against the very finely textured foliage.

3. Pot marigold, Calendula officinalis, has been modestly naturalized here for years. There are just enough to be pretty, without being invasive. Goodness! Naked ladies and pot! 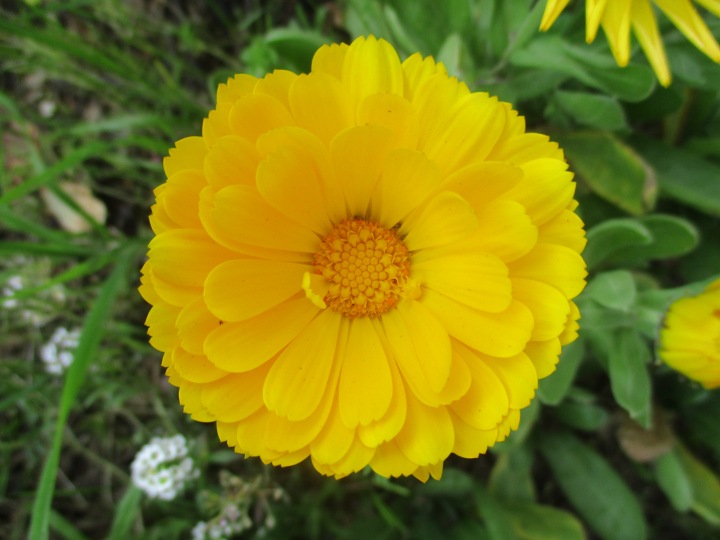 4. Flowering maple, Abutilon spp., was contributed by a parishioner who has many growing wild and blooming in a variety of colors at here home in the same neighborhood where I work. She gave us many of the same.

5. Dock, Rumex crispus, has a cool name, but is really just a weed. I have been trying to kill this one for years! It will not die. The root is mixed with tree roots. Now, it looks so fat and happy that I sort of want to leave it.

6. Lichen (which I can not identify with a Latin name) on the limbs of the crape myrtle featured last week got noticed enough for it to get a close up picture this week. I don’t understand the allure. I’m not lichen this one.

Since I did not use any of the pictures of camellias from Nuccios’ Nursery in Altadena that Brent sent to me (that I mentioned last week), I will try to share them next week, even though they finished blooming already.