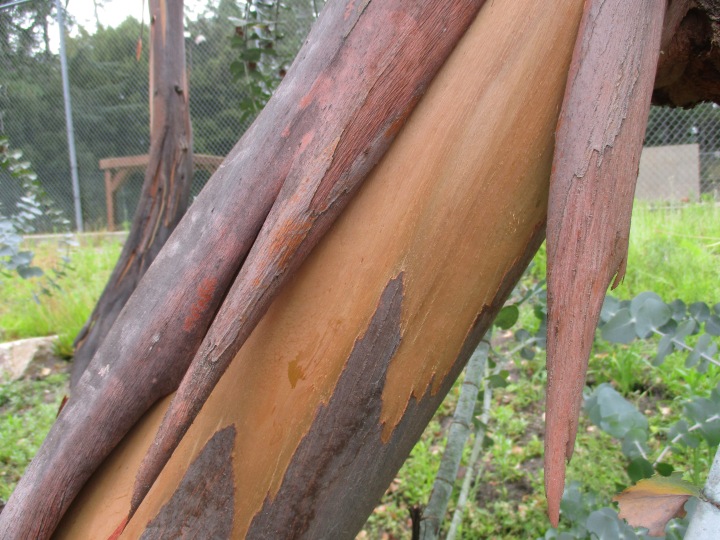 Because redwoods live for centuries, their bark gets very thick. They do not shed their bark as they grow. Old giant redwoods in the Sierra Nevada have bark that is a few feet thick and thousands of years old. Their bark is thicker than the trunks of what most of us consider to be large trees! Even much younger coastal redwoods that have regenerated here since clear cut harvesting about a century ago have bark that is a few inches thick.
They like their bark thick. It is the insulation that protects them from forest fires that incinerate other vegetation. Unlike most species here that are designed to burn and then regenerate more vigorously after fire, redwoods prefer to survive fire by being less combustible. As they mature, and their bark gets thicker, they become more resilient to fire. There are only a few species here that survive fire mostly intact, rather than regenerate after it.
Of course, survival is more complicated than mere thick bark. Redwoods, particularly coastal redwoods, also try to exclude other more combustible species from their forests. Also, they tend to shed lower limbs that would be more combustible during a fire, and prioritize higher and therefore less combustible canopies. Redwoods have developed a rather ingenious (but unfortunately ecologically delicate) systems of survival techniques.
Other trees are not so easy to figure out. Many species of Eucalyptus shed lower growth as if they want to be less combustible. They shed copious amounts of foliage and bark to inhibit undergrowth and other combustible vegetation. However, not only are they innately very combustible, but because they shed so much of their bark, they lack insulation from fire. It is as if they expect to burn back to the ground, and then regenerate after a fire.
Regardless of their logic, exfoliating bark of the larger eucalypti can be annoyingly messy. Exfoliating bark of some of the smaller eucalypti can be rather appealing in home gardens. This tree happens to be the same featured last week in ‘Silver‘.