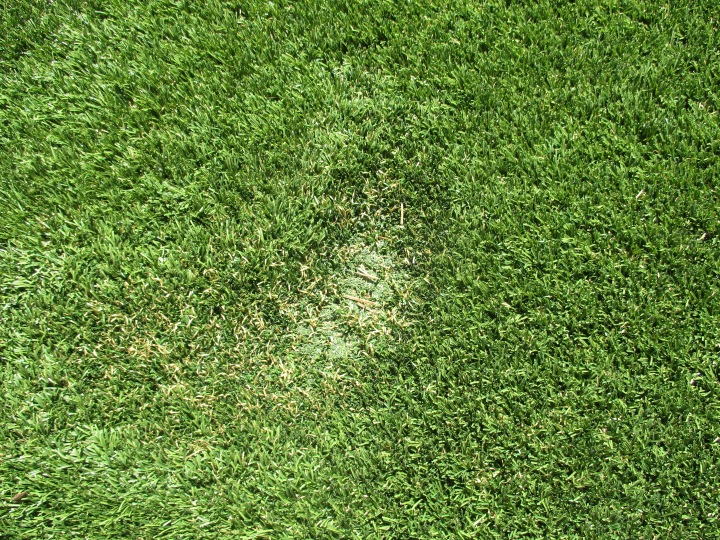 The lawn around the three small but gnarly oaks that were featured this morning in ‘Six on Saturday: Do Not Sit On Tree‘ was not always so perfectly green and uniform. Only a few months ago, it was real grass. Well, it was ‘sort of’ real grass. It was mostly dusty sand with some grass growing it in. There were weeds too, but even they were not very happy to be there.

Maintenance was ridiculous. Because some of the grass was actually alive, it needed to be mown regularly, which sometimes rutted damp soil, but more often blew dust from dry soil into the surrounding buildings. Because the soil retained such minimal moisture, the lawn needed to be irrigated regularly; but because of the old oaks trees, it could not be irrigated too generously.

The only reason that the lawn was there at all was because it got so much use. No one seemed to mind that it was such a dusty mess. The lawn dutifully served its purpose for half a century. Nonetheless, a better lawn was needed.

New sod would have been excellent, but would eventually succumb to the same wear and tear that was so brutal for the original lawn. There was also concern that the irrigation needed to sustain a turf lawn, particularly a new turf lawn, would eventually distress the aging oaks within. Ultimately, artificial turf was selected as an alternative to the real turf of the original lawn.

Rather than sow artificial seed for the artificial turf, artificial sod was installed, just like carpeting. It was remarkably quick and easy, and no one seems to mind that it is . . . well, artificial.

As resilient and undemanding as artificial turf is, it is not perfect. Almost immediately after installation, two melted spots appeared where guest had barbecued in portable grill. We do not know what happened to cause the damage, but we do know that the lawn will not repair itself.

11 thoughts on “The Grass Is Not Always Greener”