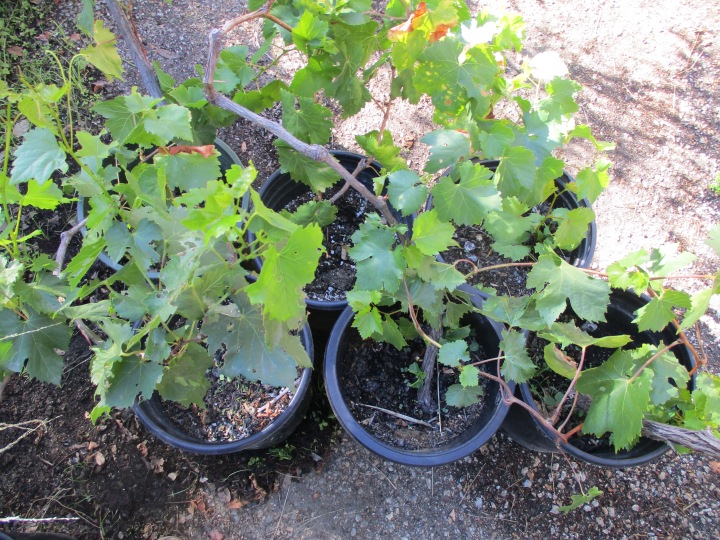 Jocular reference was made to ‘The Grapes Of Wrath’ on our our backward version on the way to Oklahoma several years ago. We happened to drive through Salinas, where author John Steinbeck was from, and Bakersfield near Weedpatch, where the migration from Oklahoma in the story ended. From there, we literally drove the same route from Oklahoma, but in reverse.

I never read ‘The Grapes Of Wrath’.

I do enjoy growing the sort of grape vines that some of us grow in our home gardens for fruit that can be eaten fresh. (I loath wine grapes and vineyards, but that is another topic for later.) There happens to be a nice big unidentified grapevine at work that needed major pruning last winter. It was a sloppy and formerly unpruned mess, with rampant long canes strewn about.

Some of these canes developed roots where they had been laying on the ground long enough to do so. The process is simply and conveniently known as ‘layering’. It is actually a technique for propagation that is sometimes done intentionally to plants that are not doing it naturally, (Again, that is another topic for later.) After giving a few rooted canes away, there were a few extra.

Since last winter, seven copies of the original grapevine are still here! I really do not know what to do with them. I could give them to neighbors before the end of this winter, but would then worry about them not getting the annual pruning they need, and overwhelming the landscapes they inhabit, just like the original vine did. Even in their cans, they are already a sloppy mess.

Many surplus plants are accumulating here. Many will go into landscapes as rainy weather starts. However, there are a few that will not be so easy to accommodate.

9 thoughts on “The Wrath Of Grapes”