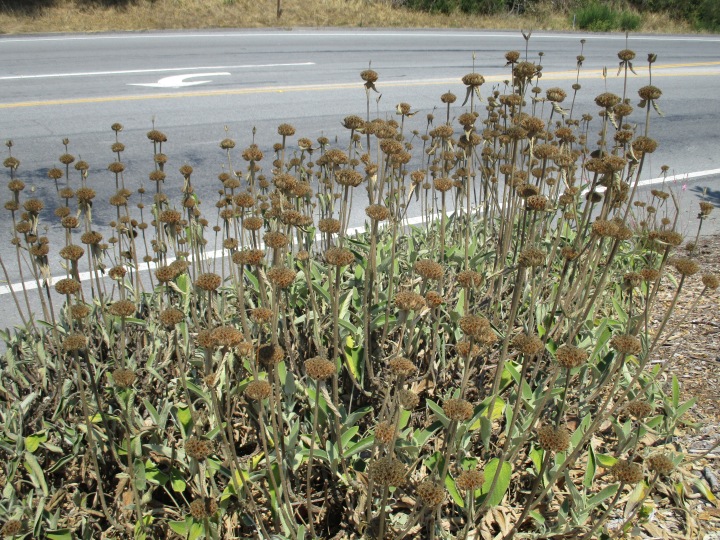 This salvia would probably look badder without it. Yes, that’s badder and not better. I mean, if all these slightly unsightly seeded stems were cut back, then the even more unsightly deteriorating foliage below would be more prominent. When one looks at it that way, the bad seed suspended above does not seem all that bad.

It is doubtful that the ‘gardeners’ who ‘maintain’ this site put that much thought into it. They are, after all, the same who ‘maintain’ the firethorn that is pictured in this article from June 27 (The Wrong Plant In The Wrong Place https://tonytomeo.com/2018/06/27/horridculture-the-wrong-plant-in-the-wrong-place/ ). There were probably too busy botching something else to notice that this salvia is in need of botching as well.

There is some unpruned black sage nearby that displays similar but smaller seeded structures on more irregular and arching stems, rather than vertical stems that stand upright. They too are somewhat appealing in a weirdly sculptural sort of way. They might stay like that until winter, when they will likely get pruned back as they deteriorate in the weather.

Sunflowers are commonly left after bloom just because finches and other seed eating birds like them so much. They do not get cut down until the birds are finished with them. To many, this is the main reason for growing sunflowers.

Another excuse to be lazy about deadheading spent blooms is that many will provide seed that can be collected for the next season, or merely allowed to self sow and naturalize. Leaving open pollinated vegetables out to go to seed is a common practice. For example, the last few radishes to be pulled might just be left to bolt, bloom and go to seed. Cosmos tends to throw its seed whether we want it to or not.

6 thoughts on “The Bad Seed”