There are just too many cool things blooming in my colleague’s garden to not get some more pictures. Some may seem to be redundant to others that were shared earlier, as well as to some that have not been shared yet. The unknown salvia and lion’s tail are finishing their bloom, as it the know what time of year it is. The weather may not seem like that of late summer, but they know otherwise. I got these pictures while I could. African iris and African daisy are oblivious. They bloom whenever they want to, and African iris can even bloom a little bit through winter if it chooses to. Autumn sage, as the name implies blooms best about now. Of these six, only the four O’clock will deteriorate in autumn and die back through winter. The salvias will get pruned back anyway.

1. Four O’clock, Mirabilis jalapa, are the same as those featured last Saturday in Six on Saturday, and in the following brief article about the individual plants that bloom with flowers of different colors. This one looks like a blob of mustard with a bit of ketchup that squirted out of a hamburger as someone bit into it. The rich red flower in the background that looks more like plain ketchup is on the same stem. 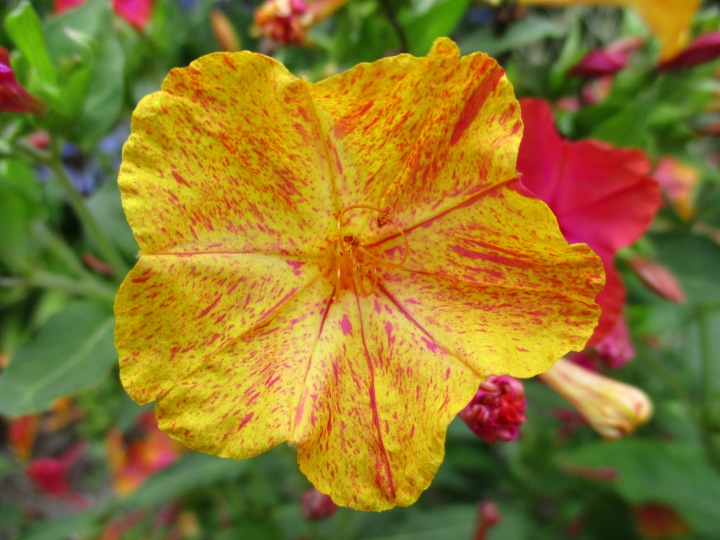 2. Autumn sage, Salvia gregii, is a different cultivar of the same species featured yesterday. The picture that was posted yesterday was from a specimen in the landscape at the library in town. This picture is that of a cultivar of smaller stature but with bigger flowers. The zonal geraniums of questionable (pink, salmon, peach or whatever) color that were featured last week can be seen in the background. 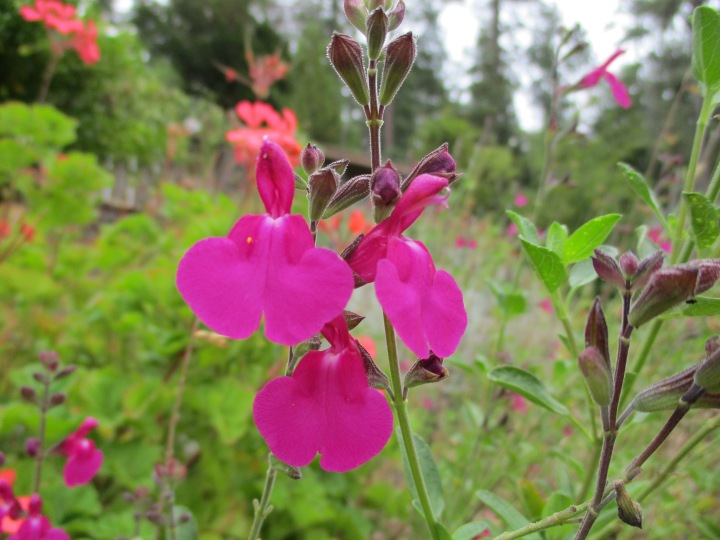 3. Black and blue salvia, Salvia guarantica, looks just like this. . . or this looks just like black and blue salvia. I really do not know what it is. It sure is an exquisite blue though. The base of the plant is rather scrawny, almost as if it intends to grow only as an annual. It will get cut back like other salvias, but not as aggressively. If it regenerates from the base like it should, the old growth can be cut back later. 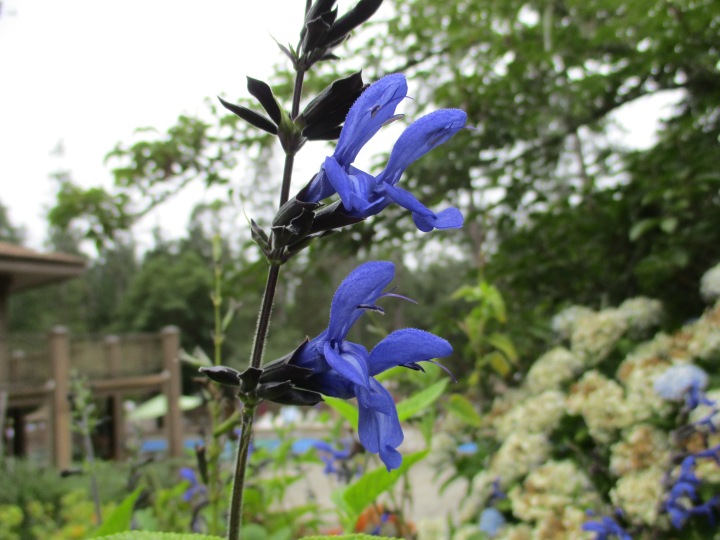 4. Yellow African iris, Morea bicolor, is sort of cliché. However, this is the only one anywhere around. Seriously, with all the many acres of landscape that my colleague maintains out there, this is the only one. The more common white African iris, Dietes iridioides, is lacking completely. (‘Dietes‘ and ‘Morea‘ are synonyms, but ‘Dietes‘ is uses more for the ‘iridiodes, and ‘Morea‘ is used more for the ‘bicolor‘.) 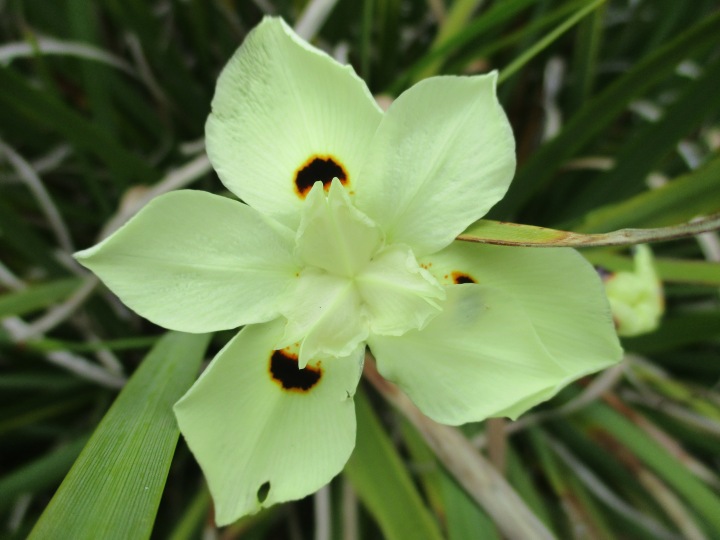 5. African daisy, Osteospermum ecklonsis, looks something like gazania. There are plenty pictures of gazania as well, but I will use them for the next two weeks. This species of African daisy is shrubbier and more colorful than the sprawling types that were popular as ground cover back in the 1980s. It blooms more profusely, and with more vivid colors. I probably should have gotten pictures of the other colors too. 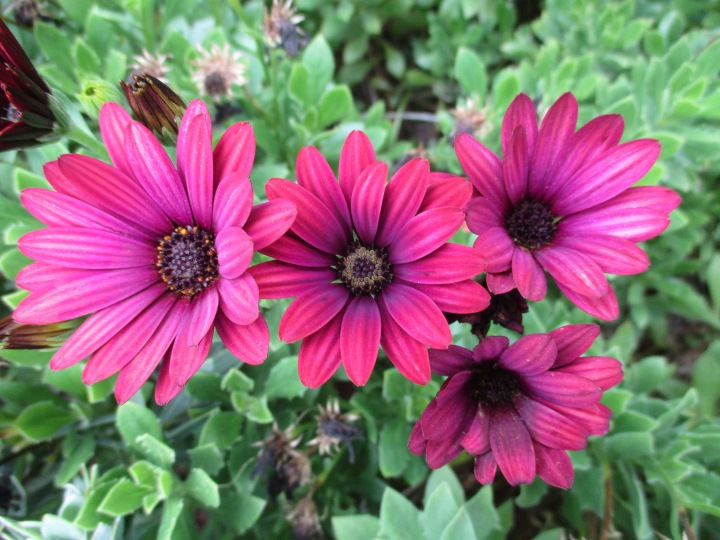 6. Lion’s tail, Leonotis leonurus, will be featured in my weekly gardening column this week, which shows up here on Tuesday. I am no fan of orange, but I can not dislike this bloom. The color is as flashy as that of California poppy. I will never understand why this perennial is not more popular than it it. It has been available longer than some of the less impressive salvias, but salvias are trendy. They are related of course. 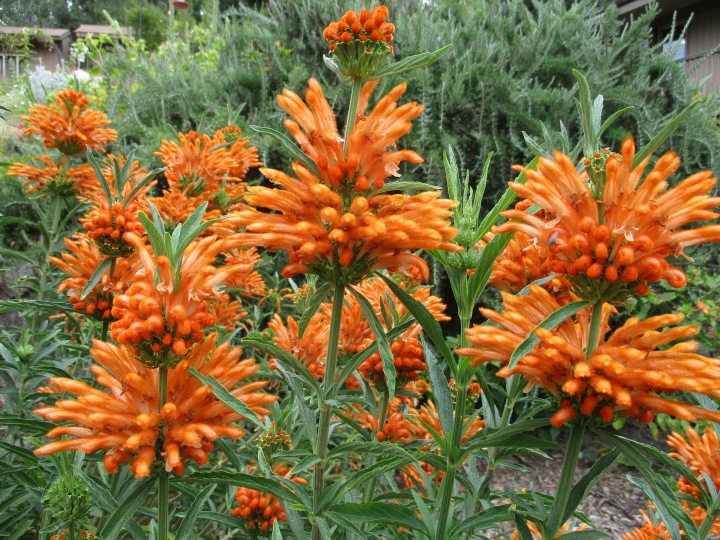 33 thoughts on “Six on Saturday: Again – Not My Garden”