The landscape where these trees live was actually rather well designed, and for a few years, had been well maintained. Seriously! The flowering crabapples were likely selected because they would not get tall enough to encroach into the utility easement above. There were pruned as much as necessary to prevent them from developing into a nasty thicket like young flowering crabapples typically do, but without significantly compromising the spectacular bloom. They really were spectacular! 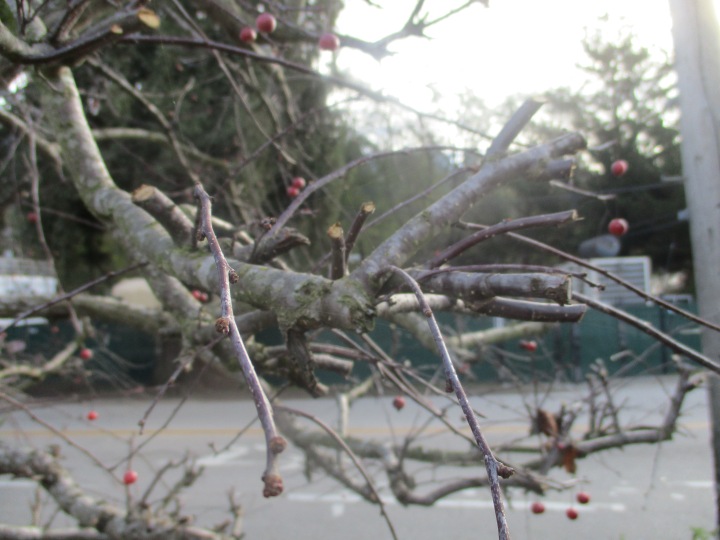 About six years ago, a different crew of ‘gardeners’ was hired. It was obvious when it happened because the brutality to other features of the formerly well maintained landscape was so immediate. These flowering crabapples were somehow spared, but only temporarily. They were at their prime when they displayed exemplary bloom for the last time three springs ago. As these pictures indicate, they were hacked back two springs ago, just as the fat floral buds were showing bright pink color, and were about to pop open. All the buds and blooming stems that the trees had put so much work into were cut off and taken away, just days or maybe hours before the big show. The process was repeated in the same manner just prior to bloom last year. A scarce few twigs were somehow missed, and managed to bloom with a few blossoms that developed into the few fruits that can be seen in the second picture. I can not explain why the hacking was done earlier this year. Nor can I explain why a bit more of the twiggy growth remains. Did the ‘gardeners’ leave it for a tiny bit of bloom, or were they just lazy with their mutilation. It does not matter. As long as these trees get hacked like this, they are ruined. The client pays the ‘gardeners’ to do this.

Now, these trees could only be salvaged by renovation. This would involve pollarding, which would remove the tangles of gnarled stubs, but would leave horridly stubbed limbs to start the regeneration process. The trees would be just as deprived of bloom for the first year, but would at least be able to compartmentalize (heal) the wounds on the cleanly stubbed limbs. The secondary growth would need to be very meticulously and systematically groomed and pruned for many years to replace the canopy. It is possible, but would involve more work than even a good horticulturist or arborist would want to devote to the project.

24 thoughts on “Horridculture – Disdain For Bloom”