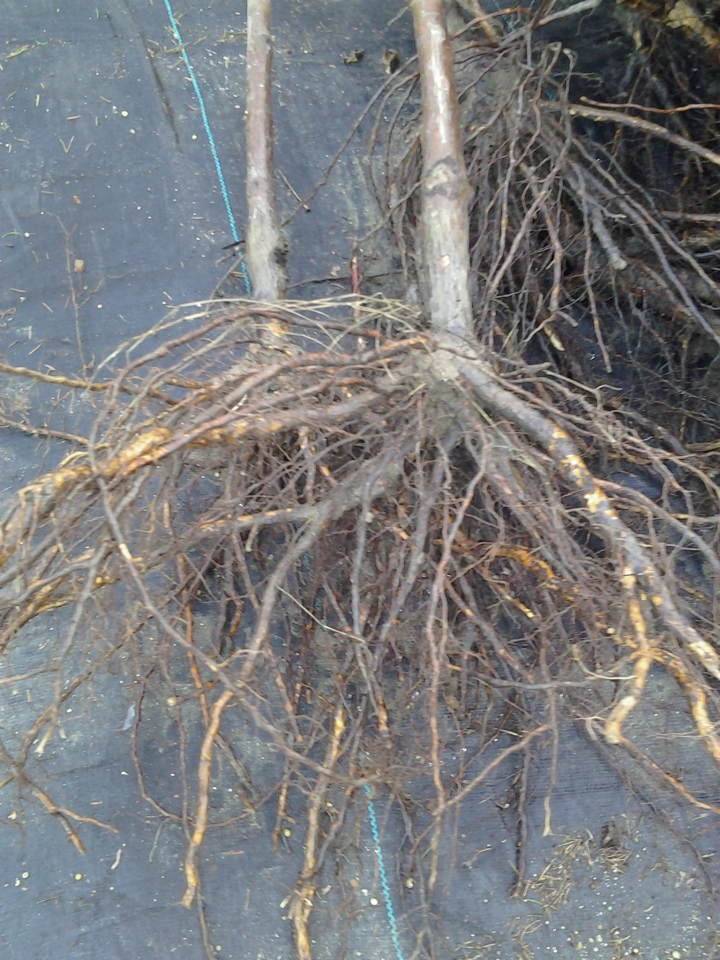 Autumn really is the season for planting. That is the general rule. One generalization about general rules is that they generally do not apply to all of the specifics. In other words, there are likely certain exceptions. In this case, there are some types of plants that should not be planted in autumn. The next best season for planting is probably winter, which happens to be ‘bare root season’.

Just before the last of the Christmas trees were being sold, and relinquishing their space in nurseries, bare root stock started moving in. Some bare root stock is prepackaged with its otherwise bare roots in bags of moist sawdust. Nurseries that provide large volumes are likely to heel in unpackaged bare root stock into bins of moist sand, from which it gets pulled and wrapped as sold.

As the term ‘bare root’ implies, bare root stock was dug as early as the onset of dormancy in late autumn, and deprived of the soil that it grew in. Because it is dormant, and the weather is cool and damp, it does not mind much, if it even knows at all. As it emerges from dormancy next spring, it resumes growth, and disperses roots into the new soil that it got planted into while dormant.

Bare root stock is significantly less expensive than canned (potted) stock because it lightweight and does not take up much space in the nursery. It is also more efficient, since it only stops briefly in retail nurseries, on its way from growers to its final home destinations. New plants start dispersing roots right away, instead taking time and effort to recover from earlier confinement of roots.

Deciduous fruit trees and roses are the most familiar of bare root stock. The bare root fruit trees include the stone fruits of the genus Prunus, such as apricot, cherry, plum, prune, peach, nectarine and almond, as well as pomme fruits, such as apple, pear and quince. Figs, pomegranates, persimmons, walnuts, mulberries, grapevines, currants, gooseberries, blueberries, cane berries, strawberries, rhubarb, asparagus and a miscellany of deciduous blooming but fruitless plants are also available.