Horticulture is not all flowery. It includes arboriculture, which is the horticulture of trees. As both a horticulturist and arborist, I get t0 work with it all. Not only do I work with arboriculture, but I get to work part of the time in forests of coastal redwoods, which are the tallest trees in the World. Compared to these redwoods, Douglas firs are rather average.

1. At about noon on May 7, this big Douglas fir fell unexpectedly. Since it was not cut down intentionally, no one actually yelled “Timber!”. This picture is recycled from a post from May 10.

2. This is what it looks like now. Even though a bay tree fell on top of the Douglas fir and bridge after the picture above was taken, damage was minimal. Parts of the banister were replaced. 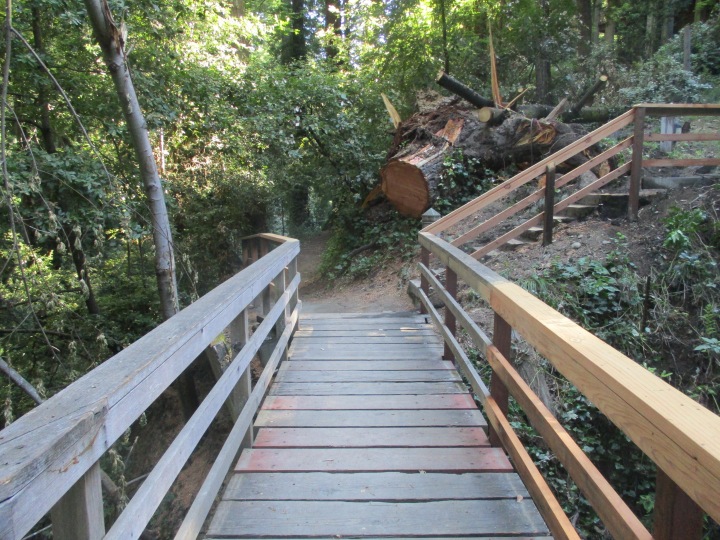 3. The Douglas fir was less than eighty years old. It started growing here in the early 1940s. My grandparents might have met it when it was a baby. By the way, I did not count all the rings.

4. The carcass of the Douglas fir is now more than twenty feet below. The light brown chips to the upper left are from the top of the tree that needed to be cleared from an adjacent roadway.

5. This unfortunate maple really was an exemplary young specimen before it got clobbered by the big Douglas fir and bay tree. Not only are the limbs stripped off, but the trunk is fractured.

6. The third trunk from the left is what remains of the bay tree that was leaning on the Douglas fir, and then fell on top of it. The top limb extending to the right is now about to break too.