Deodar cedars that were featured in the gardening column about two weeks ago, https://tonytomeo.com/2018/11/27/deodar-cedar/ , live in a small grove adjacent to a building that I work out of. They need a bit of pruning for clearance from the roof, but are otherwise rather nice and healthy specimens.

Part of another landscape in another area happened to be in need of a few deodar cedars. There were two established specimens there already. They suit the situation so well that more are desired. However, new trees are expensive, and because there is no irrigation system in that particular site, they would need to be watered very regularly by hose until they get established.

Well, you can guess what happened. We pulled up several of the seedlings that needed to be pulled up anyway, and simply plugged them into the site where more deodar cedars are desired. It was done just prior to rain, so the relocated seedlings did not even need to be soaked in. They were pruned so that they would not desiccate so readily. We planted way more than necessary because there were plenty to spare, and also because we expect that several will not survive the process. We also expect that we will likely need to cut down a few later because, although some will not survive, too many probably will. Because they are just tiny seedlings, they will get established more efficiently than canned nursery stock, and will not be so sensitive to lapses of irrigation.

Although way more than necessary were relocated, they were not even a quarter of what was available in the original herd. More than three quarters of the herd remain available to be planted elsewhere. More will likely be relocated to other parts of other landscapes before the rainy season is half way finished. A few will be canned and put into the nursery. Whatever we do to them should be done in the early part of the rainy season to take advantage of the weather while they get established. We prefer to relocate the larger seedlings first, so that those that remain will be the smaller seedlings that will take longer to get too big to move if they must wait until next year to be relocated.

1. seedlings in the ground below the parent trees 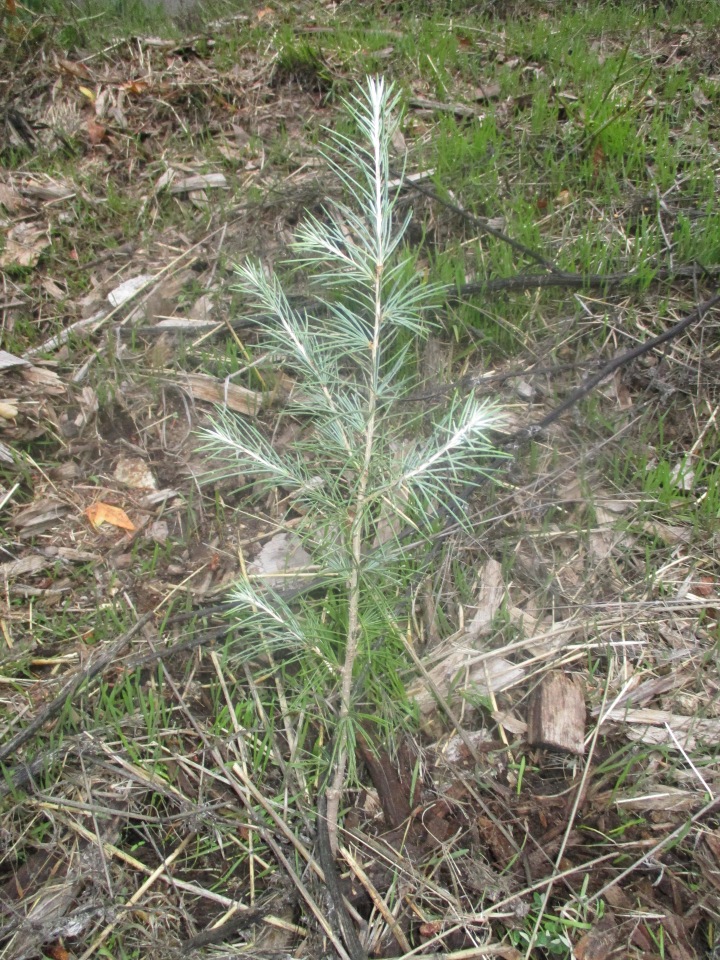